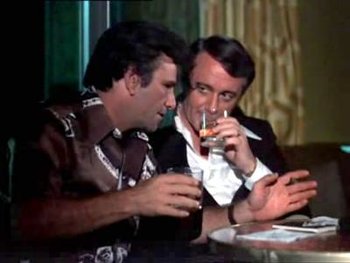 "Troubled Waters" is the fourth episode of the fourth season of Columbo.

Hayden resolves on murder. His clever scheme involves sniffing amyl nitrate to fake the symptoms of a mild heart attack. After he's put in the ship's sickbay, seemingly establishing an airtight alibi, Hayden sneaks back to Rosanna's cabin and shoots her dead. He attempts to frame Lloyd Harrington (Dean Stockwell), the pianist in the ship's band and Rosanna's jilted lover. However, Hayden didn't anticipate the presence of Lt. Columbo of the LAPD, who won a raffle and is taking a cruise with his wife. With the ship being several days out of port, Capt. Gibbon (Patrick Macnee) asks Columbo to investigate the case.

Second appearances on Columbo for Dean Stockwell (the victim in Season Two's "The Most Dangerous Game") and Bernard Fox, who plays the ship's purser in this episode and played a Scotland Yard detective in Season Two's "Dagger of the Mind".