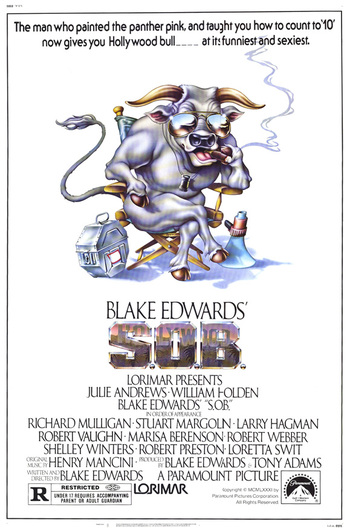 The story is a satire of the motion picture industry and Hollywood society. The main character, Felix Farmer (Mulligan), is a phenomenally successful producer who's just made the first flop of his career, to the dismay of the studio and the loss of his own sanity. Felix attempts suicide several times:

First, he attempts to die of carbon monoxide poisoning in his car, only to have it slip into gear and drive through the side of his garage, down a sand dune and ending up in the Pacific Ocean.

Next, he turns on the gas in the kitchen oven, but is prevented from carrying out his intent by two house guests with other things on their mind.

Thirdly, he attempts to hang himself from a rafter in an upstairs bedroom, only to fall through the floor, landing on a poisonous Hollywood gossip columnist standing in the living room below.

Finally, he tries to shoot himself with a police officer's gun but is prevented from doing so by the ministrations of a sweet young thing in a pair of panties, and experiences a revelation of what was missing from his movie - Free Love!

Newly energized, Felix resolves to save both the film and his reputation. With great difficulty he persuades the studio and his wife Sally Miles (Andrews), an Oscar-winning movie star with a goody-goody image, to allow him to revise the film into a soft-core pornographic musical in which she must appear topless. He liquidates most of his wealth to buy the existing footage and to bankroll further production. If he fails, both he and Sally will be impoverished, at least by Hollywood standards.

At first the studio is keen to unload the film onto Felix and move on, but as it becomes apparent that it will be a success, they plot to regain control. Using California's community property laws, they get the distribution and final-cut rights by persuading Sally to sign them over. Felix then tries to get the movie negatives from the studio's color lab vault, armed with a water pistol, and is shot by police who think it is a real pistol.

Felix's untimely and violent death creates yet another crisis, particularly for his cronies Culley, Coogan and Dr. Finegarten, who plan to give him a burial at sea. They kidnap his corpse, substituting the body of a well-known but underrated character actor who died in the first scene of the movie, having a heart attack while jogging on the beach in front of Felix's home. Felix gets a Viking funeral, being sent out to sea in a burning dinghy, while the actor finally gets the Hollywood burial many thought he deserved.

The epilogue later reveals that the revamped film was a huge success, and Sally won another Academy Award for her performance. "And everyone lived happily ever after..."