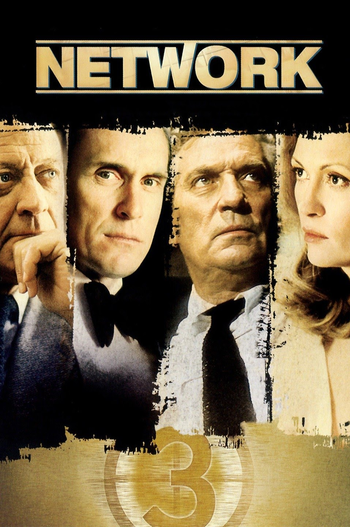 "Because less than 3% of you people read books! Because less than 15% of you read newspapers! Because the only truth you know is what you get over this tube. Right now, there is a whole, an entire generation that never knew anything that didn't come out of this tube! This tube is the Gospel, the ultimate revelation."
— Howard Beale
Advertisement:

Network is a 1976 American film, written by Paddy Chayefsky and directed by Sidney Lumet, that might just scare the living daylights out of you and make you stare at a wall for ten minutes. It is a harsh, satirical critique of (among other things) television and the short-attention-span culture over which it presides, the media in general and its shameless pandering to the Lowest Common Denominator, the giant conglomerates that have homogenized American entertainment, and the executives who treat the nightly news as a profit center instead of a public service. Initially a skewering of the sensationalizing of broadcast news, the film became frighteningly prescient of the state of the industry decades later.

The film's main story centers around Howard Beale (Peter Finch), an evening news anchor at struggling TV network Union Broadcasting System, or UBS. After being given two weeks notice that he is being laid off, Beale announces on live TV that he is going to kill himself. UBS fires him immediately, but Max Schumacher (William Holden), the head of the news department and Beale's best friend, protests; the network ultimately decides to give Beale one last broadcast, presumably so he can have a dignified farewell. Beale takes this opportunity and runs with it by launching into an on-air rant about how life is "bullshit" — which causes his ratings to skyrocket, prompting UBS to immediately renew his contract. During a subsequent broadcast, Beale preaches to his audience with the now-famous line "I'm as mad as hell, and I'm not going to take this anymore!", which soon becomes his mantra. UBS turns Beale's news program into a live talk show, with segments on gossip, astrology, and opinion polls — with Beale billed as the "mad prophet of the airwaves."

In the meantime, UBS programming executive Diana Christensen (Faye Dunaway) decides to capitalize on Beale's success, convincing ruthless network president Frank Hackett (Robert Duvall) to merge the news and entertainment divisions so that she can manage Beale's show and create a new program, The Mao Tse-Tung Hour, aimed at the new audience that Beale is bringing in. She also enters a relationship with Schumacher, who must choose between her and his wife Louise (Beatrice Straight). Things get even more complicated when Beale delivers an on-air rant against an imminent deal to merge UBS' corporate parent with a Saudi Arabian conglomerate, which draws the attention of quasi-messianic company chairman Arthur Jensen (Ned Beatty).

One of only two films (A Streetcar Named Desire is the other) to win an Academy Award in three of the four acting categories: Finch won Best Actor posthumously (and Holden was also nominated), Dunaway won Best Actress, and Straight won Best Supporting Actress (Ned Beatty was nominated for Best Supporting Actor but lost to Jason Robards for All the President's Men). Chayefsky won Best Original Screenplay.

It was adapted into a stage play in 2017 with Bryan Cranston as Howard Beale, for which he won the Tony Award for Best Performance in a Leading Role by an Actor in a Play.

Compare A Face in the Crowd, another satire on mainstream media and media demagoguery from nearly 20 years prior, but nowhere near as cynical.

If you're searching for information on the various companies that broadcast television, see Networks.

"YOU have meddled with the primal Tropes of nature, and YOU! WILL! ATONE!" :

"All I know is that first you've got to get mad! You've got to say, 'I'm a human being, goddammit! My life has value!'"