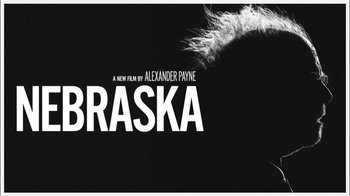 Woody Grant (Dern) is an elderly man with mild, early stage dementia, who gets a sweepstakes letter in the mail telling him he's won a million dollars, which is an obvious front to sell people magazine subscriptions. Ignoring this and the advice of his wife Kate and sons David and Ross, the former of whom picked him up after the police found him on the side of the road, he's determined to get his prize from the office in Lincoln, Nebraska. After catching his dad running away again, David decides to drive him to the destination to prevent a further incident. The two end up stopping in Woody's hometown of Hawthorne on the way there after Woody gets a head injury, and word soon spreads of Woody's supposed windfall while the two take a trip down memory lane.

Both Dern and Squibb were nominated for Golden Globes and Academy Awards, for Best Actor/Supporting Actress respectively.