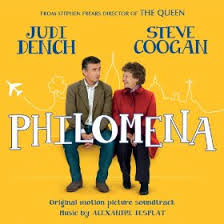 Philomena is a 2013 comedy-drama film directed by Stephen Frears, based on the true story of Philomena Lee (Judi Dench), a young woman in 1950s Ireland who becomes pregnant and is sent to one of the infamous Magdalene Laundries. Her child is forcibly adopted at age two. She remains silent until her son's fiftieth birthday.

Enter Martin Sixsmith (Steve Coogan), a journalist and former spin doctor who has been sacked. Philomena's daughter, only just learning of her mother's secret past, tries to get Martin to take on what he dismissively calls a "human interest story". However, he accepts, somewhat grudgingly, and he and Philomena go on an Odd Couple road trip round Ireland and America, trying to find the location of Philomena's Anthony.