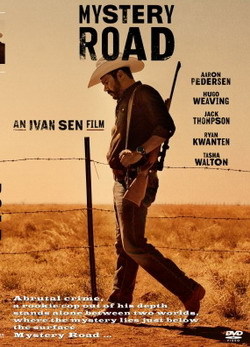 Mystery Road is a 2013 Australian crime film written and directed by Ivan Sen. It stars Aaron Pederson, Hugo Weaving and Ryan Kwanten, and features a veritable who's who of Australian character actors.

In an outback town, Jay Swan, an Indigenous detective, returns home to solve the murder of a teenage Indigenous girl whose body is found under the highway trucking route out of town. Jay is alienated from both the white-dominated police force and the Indigenous community, including his teenage daughter, whom he discovers is connected to the murdered girl.

Mystery Road was followed by the sequel Goldstone in 2016, and a TV mini-series in 2018 (which according to Word of God is set between the two films), with a second season in 2020.