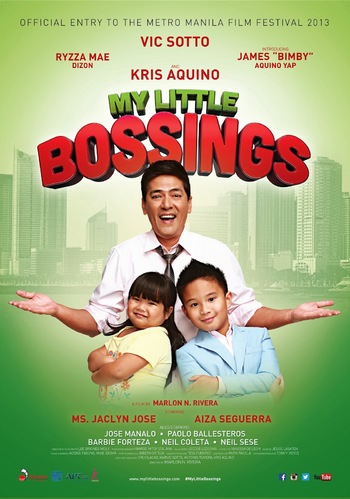 We didn't pay 220 pesos to watch the film for the actors to hawk instant pancit canton, bread, laundry detergent, cough syrup and whatever it is that you and Kris Aquino are endorsing. Are you really this desperate? Maybe not.
— Lourd de Veyra

Quite possibly the Philippines' answer to Mac and Me and The Wizard, and one of the most successful blockbusters the country has ever seen during the Metro Manila Film Festival. No, really.

Torky, played by veteran comedian Vic Sotto, is a bookkeeper working for Baba (Kris Aquino), a businesswoman. A threat in Baba's life forces her to put her son Justin under Torky's care, to be met by his daughter Ice and his young ward Ching whom he adopted from the streets. Or at least that's the premise...

...except it played out as a fairly blatant Merchandise-Driven affair, made to promote and shill for whichever products Vic Sotto, Kris Aquino and their co-stars were endorsing at the time. And there were a lot of them — Ariel detergent, Lucky Me noodles and Solmux cough syrup to name a few. Not to mention being a star vehicle for child actors Ryzza Mae Dizon and Kris' son Bimby Yap, who made his feature film debut.

An In Name Only sequel to My Little Bossings entitled My Big Bossing was released in 2014, with next to no connection to the previous film. My Big Bossing instead focuses more on Ryzza Mae Dizon's portrayals of three different characters in their respective (urban) fantasy settings, becoming more or less in line with Vic Sotto's previous Enteng Kabisote entries.