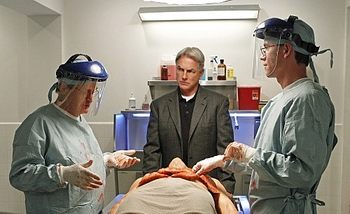 "Unlike the living, when the dead speak, they do not lie."
As coroner, I must aver,
I thoroughly examined her
And she's not only merely dead,
She's really most sincerely dead!
— The Munchkin Coroner, The Wizard of Oz
Advertisement:

A staple of the Police Procedural. Also known as the Medical Examiner or ME, the Coroner tells the detectives how the victim died and hands them any interesting trace evidence. Typically, this professional is the detectives' first stop depicted after examining the crime scene such as in Law & Order.

The coroner is typically depicted in crime shows as a middle-aged, dryly sardonic male whose daily handling of corpses has left him thoroughly desensitized to even the most horrible of deaths. This is usually played for comic effect, such as having the coroner eat a sandwich while working, or reacting calmly to a murder so gruesome it even freaks out the heroes. Many have a tendency to speak to the deceased, either in jokes or sympathy over a particularly violent death. This tends to be Truth in Television. May or may not be involved in dismissing violent murders as suicides or accidents; the role can also be filled by another member of law enforcement.

Note that in Real Life the position of coroner may or may not be held by a medical doctor. In some jurisdictions both positions are held by the same person, but in others the coroner is a lawyer or paralegal who handles the paperwork, conducts inquiries, etc., while the medical examiner is a forensic pathologist who conducts the autopsies. In some areas the coroner is an elected official like The Sheriff (indeed, in the United States this is very common), and a few US counties even combine the two offices. In several states, the coroner also has the power to arrest the sheriff and serve as the acting sheriff, taking interim charge of the county jail. In some areas, too, there aren't enough suspicious deaths to justify the cost of a full-time forensic pathologist; in these areas, a local surgeon or GP usually handles less suspicious cases while obvious murders are farmed out to freelance forensic pathologists. Also, in Real Life most deaths reported to the coroner or medical examiner aren't investigated, since most deaths that have to be reported aren't suspicious deaths.

Interestingly, most forensic pathology residents these days are women; in twenty years, it's estimated that almost all medical examiners will be female.

Compare to the Creepy Mortician and the Undertaker character in Westerns.