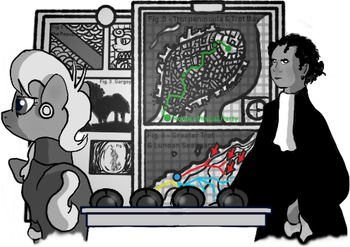 It's not a courtesy call.
"A lawyer doesn't always want to know what really happened. It's a tightrope walk. Whether or not the lawyer believes in his client's innocence is not the issue. It's his duty to defend his client - no more and no less."
— Ferdinand von Schirach
Advertisement:

It is November of 2015, the place is Earth. One year ago, Equestria suddenly appeared near Australia in the shape of an enormous island, and the first anniversary of their "discovery" is looming. Intricate diplomatic exchange and political matchmaking have ensured that the equine world could integrate into the human one peacefully and swimmingly.

This harmony dissipates however when Queen Chrysalis, a dreaded changeling monarch of high infamy and a mysterious past, is unexpectedly captured by the Royal Guard, and the issue arises on how to best put her on trial for her numerous crimes against the ponies of Equestria.

As the title suggests, it is thus decided to try her in front of the only place that can be trusted to stay neutral — the International Criminal Court, located in the Hague, in the Netherlands.

The story follows Alexander Estermann, a Swiss lawyer tasked with defending the queen, and Edith Šarić, a Bosnian forensic investigator working for the prosecution, as they dig their way through "a quagmire of vengeance, racism, manipulation, lies, hearsay and self-deception" to find out who the changeling monarch really is and what her role was during the worst chapters of Equestrian history.

, written by one Dan The Man

, is not your typical My Little Pony: Friendship Is Magic fanfic, but a uniquely weird amalgamation of courtroom drama, political thriller and fantasy adventure that places Queen Chrysalis and Equestria as a whole in a war crimes tribunal procedural plot, exploring the issues that might arise when a cynical human judicial system designed to prosecute war offences and crimes against humanity is abruptly forced to arbitrate in an ever-lasting battle between good and evil inside a magical and painfully idealistic Crapsaccharine World.

Now has an officially-sanctioned