You Can't Handle the Parody 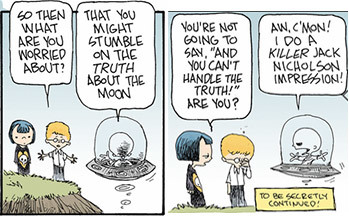 Jessup: You want answers?!
Kaffee: I want the truth!
Jessup: You can't handle the truth!
— The source material for this trope, from A Few Good Men
Advertisement:

We've all heard this phrase used a million times in a million different ways. Sometimes it's the exact phrase, but more often than not the writer will twist it in some way, just a bit, to impart a little comedy while not compromising the actual quote - like replacing "truth" with "tooth". Or maybe "parody".

The phrase itself comes from the famous rant by Jack Nicholson's character at the end of A Few Good Men. Thanks to Pop-Cultural Osmosis, and particularly this trope, this phrase has become more well known than the actual movie (which is by no means an "unknown" film, nor an unmemorable one).