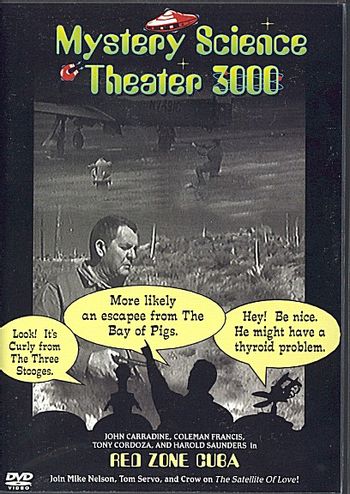 "The Red Zone is for Cuba and un-Cuba only."
Tom Servo: Well, I see the movie has finally thrown up its hands and said "I just don't know."
Crow: I wanna hurt this movie, but I can never hurt it the way it hurt me.
Mike Nelson: Did they even need to GO to Cuba?
—Mystery Science Theater 3000's take

One of the few films that actually broke the SOL crew, though the Mads don't notice due to Forrester having been beaten to a pulp by mobsters prior to the experiment — and Forrester too busy beating Frank to even notice their "Bouncy Upbeat Song". Sanity Slippage was the only thing saving them from the Despair Event Horizon. Even the Mads descend into madness at the end.