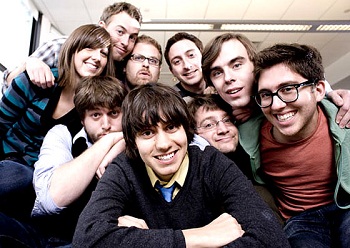 The original cast of Hardly Working.note Ricky Van Veen (front center) has since begun working at the parent company, and Sarah Schneider (far left) left to join the writing staff of Saturday Night Live
Sarah: Guys! A tiger got loose in the office somehow!
Jeff: Well that doesn't make any se—AHHHHHHH! HE'S EATING ME!
Advertisement:

Hardly Working is an online series of shorts taking place in the office from which the CollegeHumor website is run. The series is written by and stars the CH staff. The first shorts were ten-second-long, one-joke bits shot with a cam-corder for fun, but as their popularity grew they expanded into full sketches several minutes long and shot with multiple professional cameras.

Most of the shorts take place in the context of supposed everyday life working at the website's office. The most prominent subseries within Hardly Working is Jake and Amir, a Boke and Tsukkomi Routine between the two titular characters.