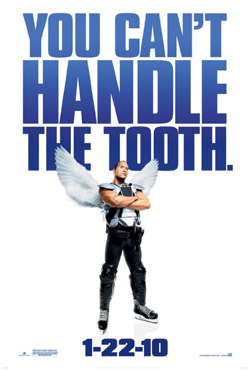 Tooth Fairy is a 2010 family comedy starring Dwayne Johnson and directed by Michael Lembeck. Derek Thompson (Johnson), a hard-charging minor league hockey player whose nickname comes from his habit of separating opposing players from their teeth. When he discourages a youngster's hopes, steals a dollar from his girlfriend Carly's (Ashley Judd) six-year-old daughter Tess (Destiny Whitlock) that had been left for her lost tooth, and nearly tells her the Tooth Fairy doesn't exist, he is kicked out and sent home. That night, Derek receives a magical summons under his pillow. He grows wings and is transported to the realm of tooth fairies. He meets his caseworker, Tracy (Stephen Merchant) and the head fairy, Lily (Julie Andrews), and he's sentenced to one week's hard labor as a real tooth fairy, complete with the requisite tutu, wings and magic wand. At first, Derek "can't handle the tooth", bumbling and stumbling as he tries to furtively wing his way through strangers' homes, doing what tooth fairies do. But as Derek slowly adapts to his new position, he begins to rediscover his own forgotten dreams.