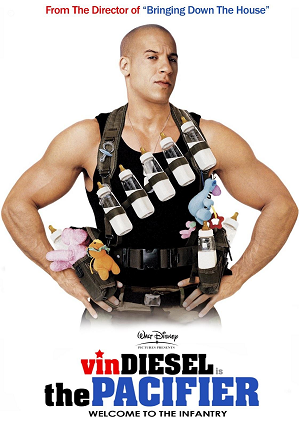 "You burp the baby, you shoot the gun, you change the diaper, a title pun. You drive the carpool, you fight away, you tuck them in, and you save the day."
— Brett and Ellen (about The Pacifier), The Rotten Tomatoes Show
Advertisement:

A typecast actor known for their macho action roles is cast in a movie where they play a tough guy Action Hero or macho guy type put in a position of responsibility for children. Sometimes this takes the form of a Badass and Child Duo. This usually results in in a Fish out of Water situation that is Played for Laughs as the macho manly man struggles to deal with new and unfamiliar problems that most family men would consider par for the course, such as dealing with a Potty Emergency, trying to cook meals, balancing work and family, and putting up with a Mouthy Kid. The macho man is forced to learn new skills, though he often finds creative ways to apply his action hero skills to a more domestic situation. Usually the children are bad or mischievous, and usually the "Action Hero" begins the movie "hating children" and gradually grows to love them over the course of the film.

To qualify as this trope, the casting is as important as the plot. A primary factor in this trope is to see the actor in an unusual (for them) and often humorous situation. The specific details of the character are often less important than just the fact that they are a badass or Action Hero, because that is what the actor invariably plays. This is similar to Playing Against Type, but instead of having the actor play someone unlike what they normally play, they play their regular character type but in an unusual situation. However, while the bulk of the movie will focus on domestic hijinks, there will often be at least a few action scenes, especially at the conclusion of the movie.

See also A Day in Her Apron.