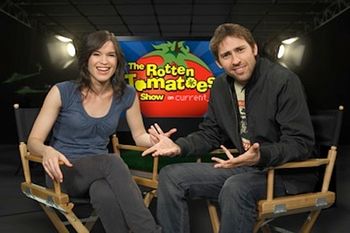 The Rotten Tomatoes Show (commonly shortened to The RT Show) was a weekly comedy Review Show based on the filmsite Rotten Tomatoes that aired on Current TV. The show mixes elements from traditional Review Shows with Sketch Comedy and various other tropes to create a self-described "fast-paced, comedic journey through the week in cinema."

Each episode features hosts/writers/producers Ellen Fox and Brett Erlich reviewing three (sometimes two, if it's a slow week) movies that have been (or will be) released that week in theaters. Originally, Ellen and Brett were backed by webcam reviews from viewers (usually members of Current.com or Rotten Tomatoes users), comedians, professional critics, and independent filmmakers. This format changed during Season 2, when the webcam reviews were replaced by solely professional critics in front of a green screen at the show's actual studio. Fan reaction has been, uh...unfavorable.

Other than the actual reviews, the show also features various segments scattered throughout. Once an Episode segments are:

The show is not hugely recognized, but does have a solid fanbase and has been acclaimed by the majority of viewers, garnering a very respectable 8.2 star-rating on IMDb. Critical reception, however, is rather mixed. However, the show truly does live up to its promise, being fast-paced, tongue-and-cheek, and normally hilarious with charming hosts, and has provided quite the number of quotes on this wiki.

Aired on Current TV Thursday nights at 10:30 or online at its official website. Brett and Ellen each have Twitter accounts at @bretterlich

The Rotten Tomatoes Show aired from early 2009 until September 2010, when it was surprisingly canned for unknown reasons—there were still RT Show segment on infoMania, but that's probably not enough, and infoMania was itself canned in 2011 as Current remade its schedule around Keith Olbermann and more "hard" news shows.