Film / The Spy Next Door 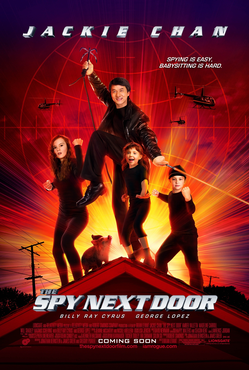 Jackie Chan's only movie aimed directly at kids, rather than families. It stars Billy Ray Cyrus and George Lopez, Amber Valleta (as Gillian) from Gamer and The Transporter 2 and three kids. Later in 2010, Chan made the much better-recieved The Karate Kid.
Advertisement:

It follows Bob Ho (Chan), a CIA agent who retires so that he can spend more time with his girlfriend, Gillian, who lives next door, and her three kids ( Nora, Farren, and Ian). When Gillian goes away to visit her father in the hospital, Bob agrees to babysit the children. Hilarity Ensues. However, a plot by Russian spies looking for a stolen secret formula they believe Ho has threatens to put the entire family, and the world, in danger.