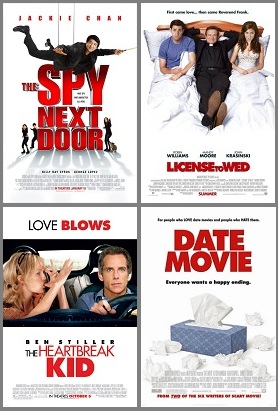 We've all seen them. The posters featuring the unlucky Average Joe protagonist, usually in a compromising position, set against a white background. The title will be written in big, bold, red letters, almost always typeset in either Futura or Impact. Add touches of green to the poster, and it becomes a Christmas comedy film.

This is used frequently for adult comedies, although it's becoming increasingly more popular for movies aimed at children as well, which sometimes makes it difficult to determine the movie's target age group. A somewhat classier version exists for romantic comedies aimed at a female audience. They share the white background and the unlucky protagonist(s), but the title font is usually Times New Roman, Helvetica or something similar. Use of this format seems to have declined since the late 2000s, and it may be on the way to becoming a Discredited Trope thanks to some notable offenders that use this style tainting the audience's expectations.

No relation to White and Red and Eerie All Over. See also Orange/Blue Contrast for another trend in movie poster design.