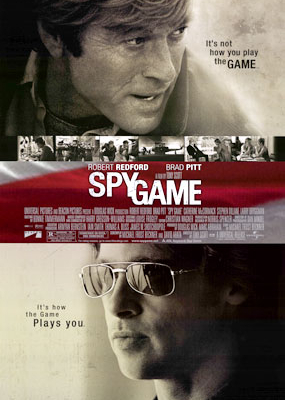 It's amazing how they didn't age a day in sixteen years.
"Don't ever risk your life for an asset. If it comes down to you or them... send flowers."
— Nathan Muir
Advertisement:

CIA operative Nathan Muir (Redford) is on the brink of retirement when he finds out that his protege Tom Bishop (Pitt), who he hasn't seen in six years, has been arrested in China for espionage. After learning that the agency has no intention of rescuing Bishop themselves, and with only twenty-four hours on the clock until Bishop is scheduled to be executed, Muir utilizes all of his skills, resources, and irreverent manner to find a way to rescue his friend in time. In the process, he also has to contend with the bureaucracy of the CIA's top echelon, as he's called before a committee to tell them what he knows about the younger agent, leading Muir to recall how he recruited and trained Bishop — from their first meeting in Vietnam, through their turbulent days together as operatives, and finally to the woman who threatened their friendship.