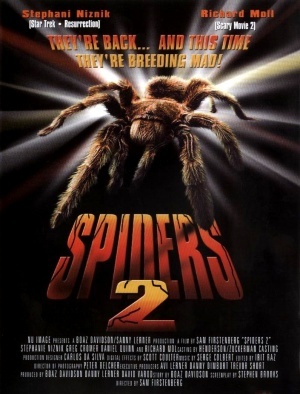 Spiders II: Breeding Ground is a Horror-science fiction film released on September 24, 2002 on Home Video, While it was released on Japan in cinemas first on May 9, 2001 and its directed by Sam Firstenberg and it is the sequel to 2000's Spiders.

Starring Stephanie Niznik and Greg Cromer, Alexandra (Niznik) and Jason (Cromer) are rescued at sea by a passing ship that happens to be the floating laboratory of crazed Dr. Grbac (Richard Moll). This is very bad news for the healthy young couple as the nutty doctor implants spider eggs in the bodies of humans to create giant spiders; Jason is next, unless Alex can defeat Grbac and a horde of escaped spiders.