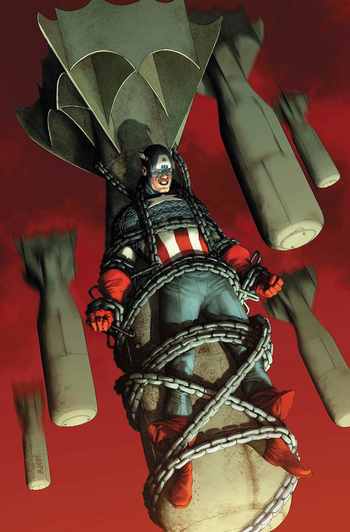 A genuine badass looking genuinely distressed.
"This is my entire career in one scene: Look, she's helpless! No, she's kicking their asses!"
— Joss Whedon
Advertisement:

So, your mighty Action Hero is becoming just a bit too powerful and invincible. Sure, it's really cool to watch, but nobody likes a God-Mode Sue. What can you do to make them seem more human?

Why not do an episode where your badass finds themselves in the role usually reserved for a Damsel in Distress? Kidnap them, make them desperately ill or injured, or otherwise put them in a situation where they cannot single-handedly resolve the plot, and your audience can enjoy watching them wait for the kind of rescue they usually provide for the rest of the cast. See? Your other characters can get A Day in the Limelight, and fans of your hero will recognize that they're Not So Invincible After All...

There is one major drawback in using this trope, however. When your badass looks... bad, the audience may worry that the hero is losing their touch or the Action Girl is undergoing her long-dreaded descent from ass-kicking heroine to Faux Action Girl. Fortunately, most viewers will agree to forgive a brief lapse in badassery — anyone can have an off-day, and no one wins all the time. Beyond that, a Badass in Distress isn't your average helpless victim. If they haven't been quietly planting the seeds for their own escape this whole time, they're certainly waiting at the door, ready to leap out and kick some ass the instant it opens.

Additionally, it might also polish up the character's 'badass' credentials, as counter-productive as that might sound — the villains might have put the badass in distress either because they knew that they would be a threat to their plans if left be, or because they planned to use their badassery to further their own plans. The latter scenario tend to pop up when the bad guys needed some badass data, and it wouldn't make sense if they just kidnapped an easily captured wimp for that. And the more badass the hero is, the result of the plan would be greater, turning the hero's badass qualities against themselves.

In most cases the badass really can't get out of the situation without help, but occasionally their allies fail to save them despite their best efforts. When that happens (especially if the badass sees their friends in trouble), expect them to call up an extraordinary amount of Heroic Resolve, break free on their own, and save their would-be saviors. If the badass is a villain or even debatable antihero, there's generally no rescue attempt at all; instead of escaping, the character simply survives the execution and immediately murders everyone.

In other words, Tropes Are Tools, and this is a good one for adding depth and humanity to a potentially Invincible Hero. Done well, it makes viewers appreciate the hero's customary badassery all the more. Done badly, it may leave the audience wondering if they just caught the Distress Ball today. Done too often, the hero will start to lose the audience's sympathy, and their reputation as a mighty hero will seem exaggerated and undeserved. One way to avoid this is using the Worf Had the Flu trope, in which the plot provides a specific valid reason for why the hero was captured. Perhaps they were injured, ill, emotionally traumatized, or was defeated as a result of taking on overwhelming odds in an attempt to protect others. Or they might even have allowed themselves to be Captured on Purpose, either to protect their allies and give them time to escape, rescue a previously captured ally, try to persuade the more redeemable villains to do a Heel–Face Turn, or simply get close enough to the villains to catch them off-guard.

The Ineffectual Loner is often subject to this as a way of teaching An Aesop about working as a team and trusting The Power of Friendship. Having butted heads with their allies once too often and stormed off to work on their own, they usually fail spectacularly and have to be rescued, after which the Aesop has been taught and they can resume kicking ass. Compare Defiant Captive, for captives that may or may not be badass but still have the spirit to fight back.

"Badass In Distress" is a major genre of Fan Fiction, even — or perhaps especially — when the Badass is so Bad that it requires a lot of Applied Phlebotinum to keep them under wraps.