Fanfic / Tales of the Emperasque 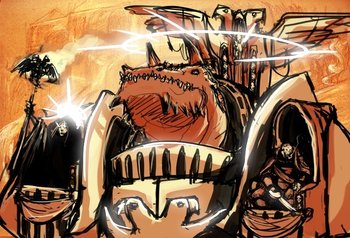 Sadly, the Emperor does not, in fact, have dudes on his shoulders. He totally could, though.
"KNOCK KNOCK MOTHERFUCKER, WHO ORDERED A BEATING?!"
— The Emperasque, showing off.
Advertisement:

Tales of the Emperasque is a Warhammer 40,000 fanfic by Someone else., which was originally posted on 4chan's /tg/ board. It's since been archived, and is also available on 1d4chan.com, as well as other stories by the author.

At the dawn of the forty-second millennium, the God-Emperor is faced with two situations that could prove disastrous to the already-weakened Imperium. Forced to take extreme measures, he summons a Khornate daemon (in the form of a Tarrasquenote an immensely powerful and nigh-unkillable monster from Dungeons & Dragons) to the Golden Throne and possesses it, finally freeing him from the constant state of torment he's been locked in for the last 10,000 years. Now able to act on his own, he proceeds to turn the 40K universe on its ear in many different ways.

The story consists of two complete sections: Rise of the Emperasque and Vulkan's Shopping Trip. Two more sections had been planned, tentatively titled How I Learned To Stop Living and Become a Necron and High Plains Matron. However, the series was canceled when Someone else. attempted to continue and found that he could no longer write in that style. The full list of story posts can be found at the bottom of the story's page at 1d4chan.com