What you looking at, you Final Fantasy reject? 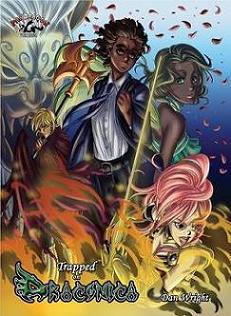 Ben is just your typical teenager – loud, obnoxious and always getting himself into hot water. Coming from a troubled household, it’s no wonder Ben’s been on the wrong side of the tracks lately. Ben thinks that his troubles can't possibly get any worse. How wrong he is...

Mysteriously teleported to the world of Draconica, the homeland of the Dragons, Ben gets caught up in a invasion by the Baalarian Empire – who are hell-bent on capturing him. But what did Ben ever do to upset them?

With no idea how he got here – and with intentions only on getting home, Ben embarks on a fantastical journey. Joining forces with the Dragonkin sisters Daniar and Erowin, Ben must help them take down the Empire before their dark grasp tightens across the land.

Little does Ben realise that his role in this battle is far more vital than he realises – and that his coming here was no accident. So he embarks on a journey that will change his life forever.

Written by Dan Wright and featuring anime artwork by Alexis M. Centeno, Trapped on Draconica is an epic fantasy adventure that is well aware of the Fantasy Kitchen Sink and other story conventions.

Click here for the sequel, Legacy of the Dragonkin