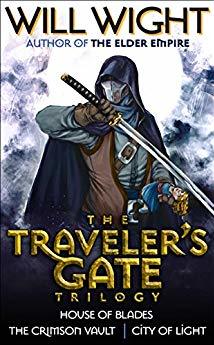 "Otoku says that there is one rule in this house, above all others: what you want, you must earn."
— Kai, Ninth Sword of Valinhall
Advertisement:

When Simon was eight years old, two Travelers attacked his family on the road. His father was killed, and his mother driven insane. Simon was only saved by the intervention of a strange man with a huge sword. He said that if Simon ever needed training, he would help, but Simon needed to take care of his mother first.

Eight years later, Simon is stuck in a tiny village with his insane mother when troops from Overlord Malachi come demanding a "sacrifice;" nine prisoners, who will be taken to the capital for unknown purposes. Simon tries to save everyone, but instead it is his friend Alin who manifests powers and kills the enemy Traveler—while their friend Leah, secretly the daughter of the King, takes the sacrifices away.

Both Simon and Alin wish to save Leah and the rest of the sacrifices, but they are on two very different paths. Alin is the hero prophesized to put an end to the sacrifices once and for all, while Simon is just a boy. They come at the problem from two different directions, gaining power to save everyone.

And of course, there is the question of what the sacrifices are truly for... and what they are holding back.

A series of fantasy novels by Will Wight. The series consists of three books, as well as a short story collection covering the original nine Territories.