I Shall Taunt You 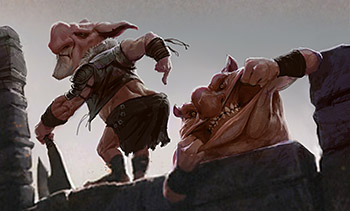 "If your enemy is of a choleric temper, seek to anger him."
— Sun Tzu, The Art of War
Advertisement:

A character deliberately insults and goads another as a calculated ploy. Possible motivations include:

Sometimes even Cthulhu can be annoyed beyond thinking straight... but you'd better have a really good plan.

In competitive Video Games this frequently takes the form of a move or "attack" which does no damage and leaves your character defenseless against retaliation while he engages in some mocking or playful behavior such as an Ass Kicking Pose, Dancing or a Finger Wag. Bring It!

Sometimes this is inverted as an "I Know You're in There Somewhere" Fight. See also Defiant to the End, Teach Him Anger, The Computer Shall Taunt You.

Compare to a Batman Gambit, of which this trope is a verbal form. Compare also Trash Talk which occurs during a competition and is more for general intimidation than calculated insults, You Fight Like a Cow which may couple this trope with a duel, Practical Taunt when the benefits are based on a gameplay system which may use this trope as justification, Unsportsmanlike Gloating which occurs after winning the fight, Volleying Insults where two characters may attempt to repeatedly use this trope on each other, Fisticuff-Provoking Comment where a particularly insulting or offensive remark results in physical violence, and Insulted Awake where the intent of the taunt is to snap the target out of a mental stupor. Bring It is when there is no subtle ploy, and the character is openly defying another one to fight.

Beware of using this on someone Too Dumb to Fool, as they may misinterpret your taunt as an Insult Backfire and react the opposite of how you want them to. Either that, or they'll simply ignore your taunt and keep doing whatever it was they were doing before you taunted them. When this trope goes bad and backfires on the taunter, see Offing the Mouth.

Now, go away, or I Shall Taunt You a second time!

In order to bait the egotistically-fragile Monster of the Week out of hiding, the Kyurangers resort to insulting him.

In order to bait the egotistically-fragile Monster of the Week out of hiding, the Kyurangers resort to insulting him.