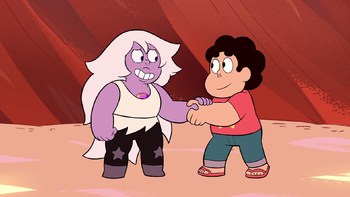 "Us worse gems stick together, right?"
"That's why we're the best."
Advertisement:

Picking right up after the events of Beta, Steven and Peridot are gaping in shock that Jasper has turned her Kindergarten into a cage for corrupted Gems. Peridot suggests returning to the temple for the other Crystal Gems, but Amethyst is gone.

She's sidling along a ledge, as Jasper monologues to a captured gem beast, wondering how they became the messes they are now. She swears she'll never let Earth twist her the way it has twisted the monsters she has taken captive. Steven looks confused; he knows from Lapis and the Crystal Gems that the Diamonds caused the corrupted gems, but Jasper doesn't?

Jasper: You're like this because you deserve it. We all only ever get what we deserve. Right, Amethyst?

Amethyst, startled that Jasper knew she was there when she was trying to be sneaky, falls off her ledge and brazenly declares she's here for a rematch. Jasper is willing enough to fight even though she's obviously not changed her opinion of Amethyst as a runt not worth her time.

Jasper is disgusted that Peridot has gone to the other side. Peridot boasts she can control metal, but her powers are still fairly weak. Jasper mops the floor with Amethyst, who finally drops to the ground in defeat.

Amethyst: No matter what I do, no matter how hard I work, I can't beat her.

Steven finally has enough of Amethyst trying to compare herself to Jasper.

Steven: Stop comparing yourself to Jasper! You're nothing like Jasper! You're like me because we're both not like anybody! And yeah, it sucks. But at least I've got you. And you've got me! So stop leaving me out of this.

Steven's impassioned speech gets through to Amethyst, and she takes Steven's offered hand to help her up. She decides impulsively to pull him into a hug, and suddenly: there's an explosion resulting in huge violet-purple mushroom cloud!

When it dissipates, Steven and Amethyst are gone. In their place stands an adorable fusion of the two of them.

New Fusion: What a beeeaaaauuuuutiful day!

As Jasper roars in dismay at the sight of yet another fusion, the new fusion ponders who they are, assembling Steven's shield and Amethyst's whip into a Killer Yo-Yo the size of a truck tire as they think about it.

New Fusion: I feel like Amethyst would know this. A Rose Quartz...and an Amethyst...make a ...Smoky Quartz.

The fight is back on! Jasper shouts a taunt at the new fusion asking if that's the only trick the Crystal Gems know. Smoky sarcastically retorts that they have all sorts of tricks. They demonstrate them by knocking Jasper around with the yo-yo.

Peridot is delighted to see Jasper getting her head handed to her, and laughs uproariously between attempts to get the metal to do as she commands. Enraged by the laughter, Jasper rushes into her spin attack. Smoky deftly avoids it, swinging out of the way, and letting Jasper crash into the wall of the Kindergarten. She hits with such impact that she puts multiple fissures in the cliffside. The makeshift jail cells come apart, and all the gem beasts and fusion experiments escape. Everything Jasper tries, Smoky counters, quipping and mocking the Ultimate Quartz all the while.

Jasper's fury overtakes her common sense and, in the worst rage yet at being defeated by yet another fusion, decides to try fusing herself. She picks the blue-green corrupted gem from Gem Hunt and Steven Vs. Amethyst, which is still in its cage and desperately trying to chew its way free. She fuses with the gem and laughs in anticipation of being able to fight Smoky Quartz on her own level. It does not work out that way.

Jasper's fusion with an unwilling, unintelligent and corrupted participant is no match for the very simpatico Smoky Quartz. They whip out two more yo-yos and whirl them like fans, propelling the Jasper fusion high into the air. As the fusion gets above the height of the clifftops, the Jasper fusion breaks. The Corruption monster may not be able to think and communicate like a regular gem, but it definitely does not like being fused with Jasper, and would rather run away.

Jasper: No! We can win if we stay together!

This does not convince the gem monster. The fusion breaks and both Jasper and her captive beast fall to earth, the latter on the bottom and flattened into an impact crater left by the former. The corrupted gem takes the chance to escape.

Jasper: No one I fuse with ever wants to stay.

The declaration is an uncharacteristically vulnerable and sad one for Jasper, but she quickly laughs it off, and gets up to continue the fight. But before she can make another move, her skin begins to erupt with lesions and growths in the color of the monster she fused with.

The shock of seeing Jasper showing signs of corruption after fusing with a corrupted gem shocks them into de-fusing. Steven and Amethyst watch as the corruption begins to spread. Amethyst warns Steven to be careful, but he rushes forward with a hand slicked with his healing spit. He believes he has a chance to help Jasper since this corruption is new and incomplete.

Jasper refuses to permit Steven to get close enough to try. She slashes at him and throws him across the desert floor, slicing his shirt open.

Grim but preferring to accept corruption over being helped by “Rose Quartz”, Jasper says she understands now that Rose got an army by waiting for gems to be so lost and broken that they'd follow anyone to feel like less of a failure.

Steven objects to being called Rose again. He tells Jasper he's not Rose, but his insistence that he's Steven falls on deaf ears. He tries instead to encourage her to fight the encroaching corruption, which only serves to get her more furious and speed the corruption's spread.

Though Steven, Amethyst and Peridot are confused at Jasper's impassioned tirade, it's too late. Jasper can say no more. The rage has helped the corruption along, and Jasper is lost, becoming a Gem beast herself.

It's about to charge, when Peridot finally gets enough control over metal to fling one of the cage bars through the beast's body. Impaled, it poofs.

Amethyst now has a touch of sympathy for Jasper and bubbles her.

The battle won, Steven, Amethyst and Peridot warp back to the farm. They're both exhausted after fighting Jasper, and Amethyst declares she doesn't want to anything for a month. But there's no rest for the weary.

Back at the barn, Garnet and Pearl stand beside Lapis Lazuli who has five water bubbles floating above her, each containing one member of the Ruby Squad, who have come back to earth aboard the Roaming Eye.