Recap / Steven Universe S3E23 "Back to the Moon" 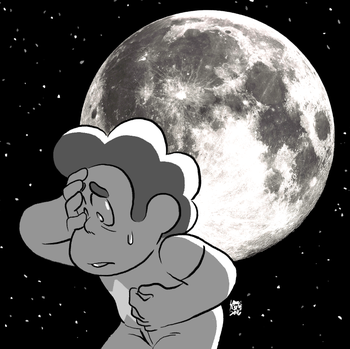 Following on from the ending of Earthlings; Steven, Peridot and Amethyst have returned to the barn after tangling with Jasper at the Beta Kindergarten to find the rest of the Crystal Gems and Lapis holding the Ruby Squad prisoner in water bubbles. Upon asking Lapis tells them that the Squad just showed up again, seemingly very upset about something so she put them in "time out".

They decide to ask one of the Rubies why they came back to Earth and Steven asks if he can choose, before revealing that he's nicknamed each Ruby based on their gem placement - Leggy, Army, Navy, Eyeball and... Doc. Leggy is released first, but she confesses that she's forgotten why they came back. Steven assures her that he used to forget things about their missions all the time when he started out on missions and Leggy goes to stand "over there". Army is released next and begins threatening to fight the Crystal Gems. Garnet goes "Aww." and there there is a quick cut to Army being restrained under Garnet's arm. Navy begins to tell them, but get embarrassed and runs over to Leggy, flustered; Eyeball insists that she's going to tell them nothing; and Doc finally tells them why they've returned - they checked Neptune and Jasper isn't there! The Squad reforms together and demand that the Crystal Gems tell them where Jasper is NOW or else!

Cue a voice shouting "Hey!" offscreen. We then see "Jasper", but purple and with a side of Peek-a-Bangs, telling the Ruby Squad that she's right here. The other Crystal Gems and Lapis are stunned into bemused silence, and Pearl says that this will never work... only to be interrupted by the Ruby Squad completely buying it. Eyeball in particular seems amazed, approaching "Jasper" and informing her that she fought in the war for Earth as well as informing her of all the tales she heard about Jasper's amazing skills in battle, apparently having emerged wearing her helmet and taken out eighty Crystal Gems before the sun set that day. She informs "Jasper" that the moment she heard this mission was to look for her, Eyeball nearly dissipated her form and states that it is an honour to finally meet her. "Jasper" states that yup it's definitely her; always large and never small since the day she was made! Eyeball suddenly states that something's different about "Jasper" though, and Pearl readies for the charade to be blown. "Jasper" manages to fool the Rubies again though by stating that her colouration is just a 'tan' from the Earth sun. Eyeball states how she hates this planet, to which "Jasper" agrees and the entire Ruby Squad start kicking up clods of soil and stamping the ground.

The Squad says that Yellow Diamond wants "Jasper" back immediately, and say that they will take the quartz back to Homeworld. "Jasper" quickly says no and bluffs that she has decided to stay... to keep the rest of the Crystal Gem group prisoner! For the Diamonds. The Ruby Squad applaud "Jasper's" devotion to her duty, but say that Yellow Diamond will want to know so she should fire a message back through the nearest Diamond base. As most of the Ruby Squad wonder where that is, Doc tries to inform them but doesn't know either. Fortunately Eyeball does, and it's on the moon. "Jasper" is alarmed that she'll have to hold this larger shape all the way to the moon, but quickly bluffs the 'holding' as holding onto the rebel prisoners she has. As the Squad leads the way back to their ship, Pearl and Garnet express concerns about how long this plan of Amethyst's can work. Amethyst says she's got this, just to the moon and back and then the Ruby Squad will be gone for good! Steven, Pearl and Garnet go to the ship, but Lapis and Peridot don't want to be prisoners so stay behind.

Inside the Roaming Eye turns out to be much larger inside than it was outside, which Steven Lampshades. Eyeball demands they show respect, and "Jasper" follows suit to the Ruby Squad's pleasure. The Crystal Gem 'prisoners' partake in some bad acting, cursing their capture by "Jasper" with Pearl going Large Ham complete with balletic leaps and gestures. Doc offers "Jasper" the captain's chair and says that she can head them to the moon base when she's ready. "Jasper" stares at the console with confusion, before picking Doc up and telling them to direct them as she is 'too tired' from her Earth time. On the way to the moon, Amethyst checks in with the other Crystal Gems telling Pearl to tone down the dramatics because Army wants to throw her out of the ship. Steven expresses concern that Amethyst has been holding her Jasper disguise for a while, but the purple Gem assures him that she's fine.

The ship lands on the base and they all file out, Pearl still in full ham-mode. Eyeball states that this is an Era one base, and looks up at one of the murals stating that it'd belonged to "her" and it was a shame what'd happened. Leggy asks who she is, and Eyeball tells her that it's Pink Diamond before saying to "Jasper" that it'd probably best if she explains. "Jasper" claims to be too messed up about it still, so Eyeball tells the tale. Earth was Pink Diamond's colony and at first all was going well, Kindergartens were incubating their first soldiers - quartz Gems like "Jasper" - before one of those quartz soldiers began rebelling and "took it too far". Eyeball asks "Jasper" where she was when it 'happened', and claims to have been there and seen it happen - she saw the leader of the Crystal Gems, Rose Quartz, shatter Pink Diamond. Steven is shocked at this news and looks at Garnet and Pearl, both who clearly indicate through their bodies that they were already aware of this fact. Steven denies that it could be true, that Rose Quartz would never shatter another Gem! As everyone turns to stare at him, Doc appears and says there is a problem.

In the very top room of the base, the assembled group examines the remains of the panel Garnet destroyed in a previous episode, noting also that the communicator is gone. As the Ruby Squad angrily condemn the Crystal Gems for this, Amethyst finally loses her hold on her disguise, shrinking back to normal behind the Squad before quickly resuming the shape as the Squad inform her that they'll have to take her to Homeworld to file the report in-person now. "Jasper" continues to assert that she can't go, confusing the Rubies before Amethyst uses Eyeball's earlier hero worship to convince the Ruby to file the report for her instead. The Squad agrees and get into their ship, with Amethyst finally dropping the disguise fully once the door is closed.

The Crystal Gems congratulate Amethyst on holding it together, with Pearl saying that she always knew she could. Steven however wanders over to Pink Diamond's mural again, and the three Gems watch him with concern. At that moment though, the door to the ship reopens and Doc leans out asking if "Jasper" wants a ride back to Earth - only to realise the Ruby Squad have been tricked again! The five Rubies fuse into their larger Ruby form, but Steven quickly tells them to "Take it outside" and opens the airlock door. The large Ruby wedges into the door though, saying that they can't be gotten rid of that easily, before a glow in the room signals that Garnet and Pearl have fused themselves into Sardonyx and winds up for the blow. A smack from the warhammer causes the giant Ruby to unfuse into her separate Rubies but as they fly out Eyeball manages to grab Steven from by the door control and pulls him out with her!

We end as the Gems watch Steven float away from the moonbase...