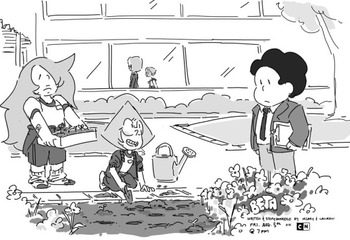 Steven and Amethyst are on their way out to the barn to visit Lapis Lazuli and Peridot. Steven's all enthuasitic about it, but Amethyst is frustrated at being interrupted. She was working on her speed and technique which isn't consistent enough for her liking.

Peridot notices something different about Amethyst but asks if Amethyst has grown taller. Amethyst confirms she's still short, and doesn't bother correcting Peridot that the thing that's different around her is that she has poofed and re-formed in a new outfit.

Amethyst is surly and disagreeable through the entire visit, despite Peridot having gone to some effort to impress their “guests”. She shows off the changes they've made to the barn, and the art projects that she and Lapis call 'meep morps'. Steven is delighted by their creations, but Amethyst continues to be ill-spirited and finally decides to do something “useful”. After she walks off, Steven clarifies to Peridot that after being beaten and poofed by Jasper, Amethyst is obsessed with beating Jasper to prove she's good enough.

Peridot is astonished, and explains that Amethyst is the far surperior gem, given she came from the Prime Kindergarten, but Jasper came from the Beta Kindergarten, both on Earth. After making sure Lapis will be okay by herself, they warp over to the location described.

As they walk across the red desert sands, Peridot explains how the Diamond Authority required the second kindergarten created halfway through the war to pump out quartz warriors fast as possible to fight Rose's army. She points out that it's obviously hurried and sloppily constructed. The holes don't line up and are injected every which way.

Peridot: This Carnelian came out sideways! How could she not? The walls are curved!

They finally come across Jasper's hole, which is enormous. Peridot again steps up to say that's no big deal.

But to Peridot's dismay, Jasper's hole is the only one that generated properly. Jasper is the closest thing to a perfectly grown gem even from this haphazardly created Kindergarten. She is the ultimate Quartz, stronger and better than any created on Earth thus far. Peridot tries gamely to keep Amethyt's spirits up before they run across something unusual. The holes from which soldiers emerged in the Kindergarten are now blocked with rough-hewn metal bars, making them approximate cages.

As Peridot wonders who would do such a thing, the answer is made apparent. The wind blows desert dust in a cloud but when it clears, there stands Jasper.

Amethyst's reaction is instant: she draws her whip from her chest and is immediately ready to fight.