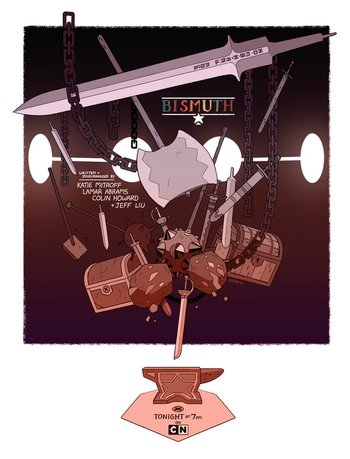 It's a chill afternoon at the Universe house. Steven is playing a video game, and the Gems are cheering him on and giving him advice. Steven stops, annoyed, when Lion pulls a T-shirt off his bureau and begins playing with it. Steven wrestles the shirt back and puts it back where it belongs. Steven explains to the unconcerned feline that it's a souvenir he doesn't want damaged. Lion goes for the shirt again, and Steven once again fights him for it. Afterwards, Steven decides to go into Lion's mane so Lion can't get to it, and hangs his T-shirt on a branch of the tree in the center of the pocket dimension.

Steven: (Thinking) Now it's safe on the branch of this perfectly stable magical tree.

The tree proves less stable than thought; the branch gives under Steven's weight with a loud crack! He falls, landing on the bubbled gem that has been floating there for as long as Steven has known about Lion's mane. It distorts and pops like a soap bubble. He emerges from the mane, and alerts the Gems:

Steven: I've made a horrible mistake!

Steven re-enters to bubble the gem, but before he can, it shines and immediately transforms into a Gem with rainbow hair right in front of him. She raises her fists as if she needs to defend herself, then realizes she's alone. After leaving, Steven quickly explains that there's a Gem in Lion's mane. The Gems ask him to describe her. Steven pops his head into the mane, the Gem in there trying to ask him to stay and help her each time he does. As Steven's description becomes more complete:

Garnet and Pearl show signs of shock, while Amethyst shows none. They finally ask him to bring the Gem out, and he does.

To the Crystal Gems' astonishment, it is Bismuth — a member of the Crystal Gems herself, long missing. A happy reunion ensues between Garnet, Pearl and the new Gem. They're thrilled because the last they'd heard from Rose, Bismuth had been lost in the Battle of the Ziggurat. Amethyst, however, doesn't know Bismuth. She's never heard of Bismuth, Rose never mentioned her, and as such Amethyst is a little suspicious of her (as well as a bit sullen at being left out of the loop about this team member and good friend). The new Gem is cheerful, boisterous, and cordial to everyone despite Amethyst's dubious response to Bismuth's presence. She is so happy to see her friends again, and asks where the rest of the Crystal Gems are.

The jovial mood instantly turns somber as the group Warps to the Strawberry Battle Field, and Pearl explains that the final battle drove the Homeworld Gems off world, but at great cost; all the Crystal Gems except Garnet and Pearl were shattered or corrupted. Garnet and Amethyst elaborate that Homeworld has recently renewed their interest in Earth. Bismuth responds to this with eagerness, ready to fight Homeworld again. Even though it's been (approximately) 5,300 years since the war, it has only been the space of a few heartbeats for her. She pep talks the Gems by reminiscing about how badass they were in battle even though the odds have always been drastically stacked against them.

Before long, Bismuth leads them to her Forge in the heart of a still-active volcano. Bismuth shows Steven, Garnet, Amethyst and Pearl where she worked and made all the material weapons the Crystal Gems used in the war. She explains that after hearing Rose tell her she could choose to be who she wanted, she chose to be the blacksmith for the Crystal Gems. She presents Garnet with a set of claws to go with her gauntlets, and gifts Pearl with an attachment to turn her spear into a trident. After a short time examining Amethyst's whip, she turns the amethyst tips into sharp, weighted morning stars. This is finally enough to win Amethyst over and put her suspicions to bed.

Bismuth and the Gems spar playfully on the beach, Bismuth making playful remarks that indicate just how well she knows Pearl, Ruby, Sapphire, and Garnet. Bismuth invites Steven to join in, as it's a Crystal Gem ritual to spar before battle. Steven, who has been watching the violence, declines, saying it's too intense for him. He instead teaches her some of his rituals: playing badminton, playing cards, eating pizza, and watching TV. Bismuth is a little confused by Lonely Blade and the character's refusal to take up the most powerful sword, even if it comes with a curse. To her, if the weapon is that powerful, it only makes sense to use it, no matter the cost.

Back at the house, Bismuth and Steven get to know each other a little bit. Bismuth admits she likes the new rituals, but still wants to have Steven show her his stuff on the battlefield. Steven says he would but his weapons are all defensive — except for Rose's sword. Bismuth explains that Rose recruited her to the Crystal Gems by telling her she didn't have to serve the Homeworld Elite by only making things for them — and that she could be whoever she wanted to be. Steven describes that as her son, he feels pressured and obligated to be like Rose; that he can never measure up. Bismuth tells him he can be different than Rose — better than her. She decides that as a different person from Rose, Steven should have a new weapon all his own.

The two of them return to the Forge without the rest of the group, and Bismuth enthusiastically describes what she was working on — a weapon she calls The Breaking Point. It is an extremely sharp, pointed weapon with a force application made for the sole purpose of shattering Gems — the purpose of which is made plain to Steven as Bismuth demonstrates it on some pumice dummies. She presents it to Steven, smiling proudly.

Steven is absolutely horrified at the sight of it, and at the idea of shattering a gem — the closest thing to killing a Gem for good there is. She encourages Steven to give the weapon a try. He gamely raises it but winces and stops, saying he's not able to do it.

He asks Bismuth if it doesn't make them just as bad as Homeworld to employ their barbaric methods. Bismuth brushes him off, saying that the Crystal Gems are better because they're killing to protect their friends, loved ones, and innocents from Homeworld's evil and elitist machinations. Steven refuses to use the Breaking Point, and while Bismuth is annoyed, she says that she'll use it herself — until Steven elaborates that no one should use it, ever.

Bismuth's friendly joviality is instantly gone, replaced by a rage as hot as the lava around them. She suddenly changed her mind about Steven, and doesn't believe he's really a half-human half-Gem child of Rose Quartz; She believes it is Rose, just wearing a new form and pretending to be someone else.

She accuses Steven, who she now believes is Rose, of valuing the gems of Homeworld more than those of her friends and compatriots. With that thought in mind, plus her rage at Steven saying exactly what Rose said about not using the Breaking Point, she goes on the attack! Coming after Steven without mercy, turning her arms into pile drivers and hurls him into walls, she explains that she and Rose fought the same way because Rose didn't understand either, and therefore left Bismuth no choice. Bismuth passionately shouts that she would have ended the war, and liberated all gems from the Diamonds. When Steven finally gains the upper hand, Bismuth angrily demands to know if "Rose" will shatter her. Steven tries to talk her down, pleading that a disagreement need not lead to them trying to kill each other, but Bismuth continues to press her attack.

Steven, battered and scuffed from the fight, can only take up his mother's sword in self-defense. As Bismuth rushes in for a coup de grace, Steven raises the blade. Bismuth gazes down in astonishment; Rose's sword has run right through her. The realization shocks her out of her furious attack.

Bismuth: [tearfully] You shoulda shattered me back then. At least if I were in pieces I wouldn't have to know how little I mattered to you.

Steven solemnly promises to tell the Crystal Gems Bismuth's story, including the disagreement and events that led up to Bismuth bubbled in Lion's mane. This is what makes Bismuth realize that he really isn't Rose.

Bismuth: Then you really are better than her.

Bismuth poofs, returning to her gem form. Steven bubbles her, and, after the Breaking Point goes into the lava so it can never be used by anyone — returns home. The Gems immediately are alarmed when they see that Bismuth is back in a bubble. He then says he has something to tell them. With obvious sadness, the Gems all go to the Burning Room, and place Bismuth's bubble there. They then go out on the patio and watch the stars, the past day's events on their minds.

We quietly cut to the credits...

This played after the first commercial break during the show's 100th episode special.

This played after the first commercial break during the show's 100th episode special.