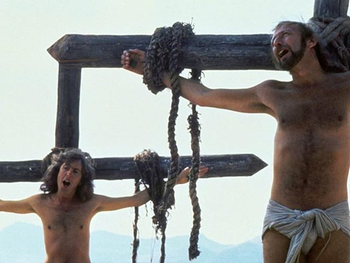 ♫ "Always look on the bri-i-ight side of li-i-ife..." ♩
"Being a comedian isn't being an insensitive prick capitalizing on the most animalistic impulses of the public, it's being a hero!
The world isn't sad!
The world's funny!
I'm a sociopath!"
— Bo Burnham, what.

This world is filled with horrible things: death, combat, pain, torture, sexual assault, (mental) disease, starvation, slavery, addiction, unjustified contempt (sexism, racism, etc)... that happen to the defenseless, the innocent, the vulnerable - quite often, children. However, while it's good to know these things exist and work to minimise them, there's a point where thinking about these things doesn't help and is bad for your mental and physical health. Indeed, it can kill you.

Thankfully, there's a way to keep sane: humour. People who are easily hurt, or like to keep things 'dignified' and 'serious', may say "This is not a laughing matter." But the truth is there is a healing power to comedy. If you can make fun of yourself, talk about your problems and have someone laugh with you, you feel better and your problems don't seem quite so bad anymore.

This trope is when you are able to make the best of a bad situation - this is finding something funny even in Hell itself. "Laughter is the best medicine", says the age-old adage. Therefore, these tend to be stories that focus on a select group of individuals who are in recovery or surviving an ordeal. It is highly unlikely for a gag of the week format to be Gallows Humor. It is also likely that the main character suffers from depression and is cheering himself up.

The term itself refers to the wooden frame used to hang people from in Public Executions and it is still quite common to see creators make use of Gallows Humor in scenes between characters awaiting their hanging. However the term has broadened to apply to the making light of any bleak, morose, or deadly occurrence.

Gallows Humor is, by definition, from the perspective of the victim or at least expressing empathy. If anyone else laughs at the victim or the author tries to make the situation funny, it's some other form of Black Comedy. This trope is generally when the joke itself or simple laughter allows you to deal with your problems.