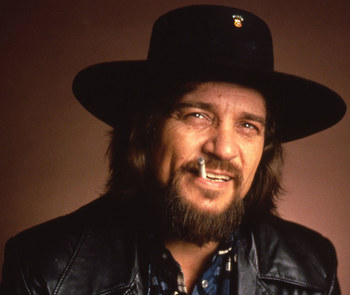 Waylon Arnold Jennings (June 15, 1937 — February 13, 2002) was a Country Music artist. He was known as one of the frontrunners for the "outlaw country" sound of The '70s, joining Willie Nelson and Merle Haggard in that regard.
Advertisement:

Born in Littlefield, Texas, Jennings first worked with Buddy Holly in the 1950s, nearly losing his life prematurely in the notorious airplane crash that killed Holly et al. (He gave his seat to The Big Bopper.) After a failed single for A&M Records, he recorded for RCA Records from 1965 through 1986, first reaching #1 in 1974 with "This Time." A guest appearance on Wanted! The Outlaws — a multi-artist album which was the first country music album ever to earn a platinum certification — kicked his career into high gear.

Many of his songs, including "I'm a Ramblin' Man," "Are You Sure Hank Done It This Way," "Luckenbach, Texas (Back to the Basics of Love)," are considered cornerstones of country music. His biggest crossover hit was the "Theme from The Dukes of Hazzard (Good Ol' Boys)." By the mid-eighties, the hits started to MCA Records brought only a handful of hits, including his last #1, "Rose in Paradise." He moved again to Epic Records in 1990, managing the #5 "Wrong," the last big hit of his career, but he continued to record consistently until diabetic complications brought his career and eventually life to an end.

Jennings was married to singer Jessi Colter, best known for her hit single "I'm Not Lisa", from 1969 until his death. Their son, Shooter, is an Alternative Country artist.