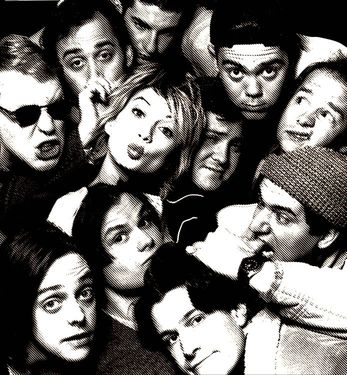 "And Now For A Special Television Event..."
Advertisement:

Probably an essential key to understanding Gen-X American college humor, The State was MTV's first true Sketch Comedy. Featuring a cast/crew of eleven twentysomethings which first coalesced as an improv/sketch group at NYU, it brought some of the most gleefully Dadaistic comedy in history to the airwaves. The show ran for four seasons before the creators made an ill-advised decision to jump to CBS (who canceled them after one special). A surprising number of the group have since gone on to greater things, frequently working together on such movies as Wet Hot American Summer and Role Models, and shows such as Reno 911!, Viva Variety, Stella, Stella's Spiritual Successor Michael And Michael Have Issues, Childrens Hospital, and Wet Hot American Summer: First Day of Camp.