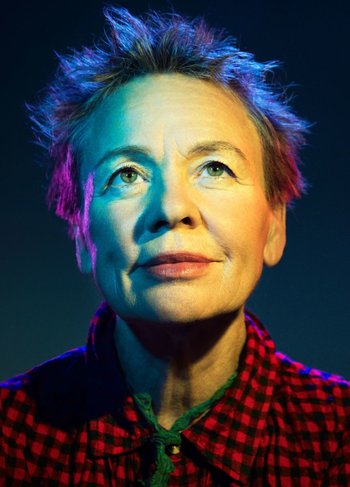 Laura Phillips "Laurie" Anderson (born June 5, 1947 in Glen Ellyn, IL) is an American musician, performance artist and composer who has been well known for her work in different fields of the avant-garde since the early 1970s. She was originally trained as a sculptor and began doing performances in the 1960s and throughout the 1970s. While, understandably, not a "pop" artist, she is best known for her 1981 single, "O Superman," which hit Number 2 on the UK charts.

A couple things to note: one of her most well-known albums, 1983's United States Live, was a truncated version of her prominent performance art show recorded over two nights in Brooklyn; it contains the live (pre-single) version of "O Superman" and runs for nearly four-and-a-half hours (edited down from the actual, full length live show - which was eight hours long). She's also made several shorts, as well as two feature films. First was a concert film called Home of the Brave in 1986. This was followed nearly 30 years later by the critically-acclaimed Heart of a Dog in 2015, a collage-like rumination on life, loss, and modern American surveillance shown mostly through the experiences of her beloved late rat terrier, Lolabelle. (The latter is available from The Criterion Collection, spine #846.)