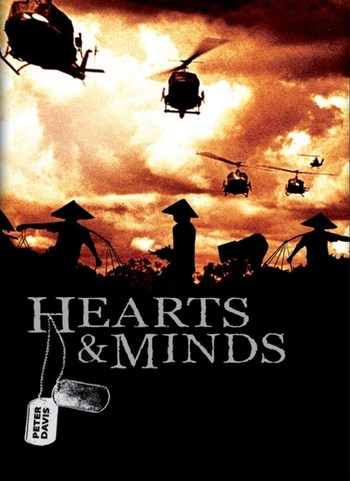 Hearts and Minds is a 1974 documentary film directed by Peter Davis.

It is a history of America's involvement in The Vietnam War. The film is a searing indictment of the United States and its presence in Vietnam, depicting the ghastly toll of pain and suffering inflicted on the Vietnamese people by the American armed forces. Documentary interviews were filmed in 1972 and 1973 just as active American military involvement was drawing to a close and before the war actually ended; the film first screened in the United States barely four months before the fall of Saigon on April 30, 1975.

Persons interviewed ranged from people of power and influence—U.S. Secretary of Defense Clark Clifford, President of South Vietnam Nguyen Khanh, General William Westmoreland, etc—as well as ordinary soldiers and civilians. Special attention is given to the suffering of Vietnamese civilians. The film does not merely question the wisdom of American foreign policy or American intervention in Indochina. It also indicts the American character, portraying a nation that is militaristic and aggressive.

See also Last Days in Vietnam, a documentary about the fall of Saigon in 1975, and The Vietnam War by Ken Burns, a documentary miniseries telling the whole history of the conflict going back to the French colonial era.