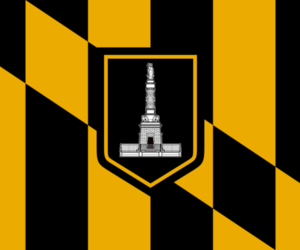 We've brought a flag!
"We like it here in Baltimore
There's so much love in Baltimore
Working hand in hand
To make this place a better land
In Baltimore
Love is what you'll find
So stop and take the time
I've got Oriole Baseball on my mind"
—Tori Amosnote 1979, under the name Ellen Amos.

Baltimore (nicknamed "Charm City") is the largest city in the state of Maryland. It is located in the central area of the state along the tidal portion of the Patapsco River, an arm of the Chesapeake Bay. Baltimore was founded in 1729 and became an independent city (separated from Baltimore County) in 1851. Information about the distinct neighborhoods of Baltimore City can be found at the Other Wiki

Historically, Baltimore is probably most notable for being the birthplace of the National Anthem, "The Star Spangled Banner". The titular flag in the song was flown over Fort McHenry during the siege of Baltimore during the War of 1812. As depicted in the first stanza of the song (the part sung at the start of every major sporting event) the flag continued to fly over the fort, despite the siege, with only minor damage. Fort McHenry is also the first to fly the new flag when a state enters the union. The actual 15-star flag, however, is not kept here (it's in the Smithsonian Museum of American History in Washington, D.C.).

Fort McHenry also was famous (or infamous) for turning its cannons on the citizens of Baltimore during the Civil War, done to keep the city, a major trade port which served as an outpost of the slave trade, from defecting to the Confederacy and thus surround Washington with hostiles. In fact, had it not been for this incident, which was memorialized in the song "Maryland, My Maryland," the war could have turned out very differently. Incidentally, this put Baltimore and Maryland as a whole into an odd little identity crisis over whether it was a northern or southern state. This still persists to this day, and it's not uncommon to see memorials to the brave Maryland Troops on both sides of Civil War battlefields. In Gettysburg, there is even a case of a Union Maryland monument directly across the battle line from a Confederate monument.

In sports, the Preakness Stakes, an American flat Thoroughbred horse race for three-year-olds (and the "second jewel" in the Triple Crown note Between the Kentucky Derby and Belmont Stakes), is held on the third Saturday in May each year at Pimlico Race Course. Fans of the city's pro football team, the Ravens, have a long-standing rivalry with those of the Pittsburgh Steelers. They aren't too fond of the Washington Redskins either. In fact, part of the reason the Steelers and Redskins are both so detested in Baltimore is because they both have significant fanbases in Baltimore, which infuriates Ravens and Baltimore Colts loyalists. Speaking of which, don't mention the Indianapolis Colts if you value your teeth. They used to be the Baltimore Colts, but the franchise moved out of the city in the dead of night, leaving it with the distinct impression they had been stabbed in the back. note The retaliation against the company that moved the team's equipment, Mayflower Movers, was so strong that the company is still unable to get work in the state. Cleveland has a similar attitude towards the Ravens, since they were the original Cleveland Browns.

In baseball, Baltimore is home to the Orioles of MLB's American League, who have a long-standing rivalry with the New York Yankees (who were actually the original Orioles for two years before moving to Bronx in 1903), the New York Mets (Baltimore tends to hold deep grudges in sports; the dislike of the Mets is due to a "bad call" in the 1969 World Series), the Cleveland Indians (several nasty playoffs meetings; see the deep grudges thing) and the Washington Nationals, though both the Mets and Nats are rarely played against (being in the National League). Since 1992, the Orioles have played in Orioles Park at Camden Yards, a refurbished train yard that turned into the first of the retro ballparks created in the 90s and 00s. The Orioles have also had an impressive list of who's who, being the first top-flight team Baltimore native Babe Ruth played on, and the exclusive team of Cal "Iron Man" Ripken Jr., who played the most consecutive games.

, the Maryland Institute College of Art (MICA), and the Peabody Institute

Baltimore City is also the home of Johns Hopkins University

, the Domino Sugar refinery (known locally as "the sugar factory"), and the Inner Harbor, a tourist location of shops, restaurants, boat slips, and the National Aquarium. It is no longer the home of McCormick & Company, the spice maker, who moved out to Hunt Valley, a suburb of Baltimore. In fact, to celebrate the anniversary of their move, during 2007, McCormick was running ads in newspapers and magazines to tell people that if you still had a can of McCormick Spice that in the manufacturer's identity field, said "Made by McCormick & Co, Baltimore MD" instead of "Made by McCormick & Co., Hunt Valley, MD" your can of spice was over 20 years old.

Hunt Valley is also the home to the Sinclair Broadcast Group, owner of many TV stations in large markets. Also in the realm of TV are the stations based on Television Hill in the northwest side of town: WJZ-13, owned by CBS, and previously a Westinghouse station, before CBS bought them in the 90s (they were ABC before that); WBAL-11, flagship of Hearst Television and an NBC affiliate (they switched to CBS in 1981, but reclaimed NBC in 1995); and the flagships of Sinclair, WBFF Fox 45, and WNUV CW 54. TV Hill's famous candelabra tower can been seen from across the city.

WMAR-2, the ABC station (owned by Scripps; they were initially CBS but got NBC in 1981, then ABC in 1995) is the only station that isn't based on Television Hill. In May 2014, their studios were the subject of a major news story, when a man tried to force his way into the studios by ramming a stolen truck into the lobby

As a port city, Baltimore was kind of important during things like the colonization of America, the Revolutionary War, the War of 1812, and the Civil War. Baltimore was also the second busiest port of entry on the East Coast in the 19th century. Because Maryland was founded as a religious sanctuary for Catholics in England, the Roman Catholic Archdiocese of Baltimore is the oldest in the United States and is a major stopping point for Popes when they visit the country. Pope John Paul II famously held mass in Camden Yards in his 1995 visit. Because of this, it's not uncommon for people from the Baltimore Area to be depicted as Catholics in media and having gone to Catholic School. Babe Ruth and Tom Clancy both attended local Catholic Schools.

Culturally, Baltimore is known for two things: Crabs, which must be covered in large quantities of Old Bay Seasoning, and must be Maryland Blue Crab, none of that stuff you get in Florida. The other is the...unique accent of city natives. Be prepared to be called "Hon'" A LOT, and learn to say goodbye to hard consonant sounds and hello to drawn out vowels. ("Baltimore" is pronounced by natives as "Bawl'imer" (or "Balw-mer" or "Ball-tee-mo") more often than not, as examples.) Baltimore is also the birthplace of National Bohemian Beer, or "Natty Boh" as Baltimoreans call it.

Unfortunately for Baltimore, the city is most likely to appear in media because of its high crime rate. Both Homicide: Life on the Street and The Wire—helmed by former Baltimore Sun journalist David Simonnote A D.C.-born Baltimorean who, for the record, cares deeply about the city and regards his two most famous works as tough love for his beloved home—focused on the high crime and corruption in the city and, by and large, did a good job portraying it. The annual murder rate typically goes above triple digits before June; this is factoring in that crime in the city is on a downturn. This has lead many people both in and out of the city calling it "Harm City" or "Bodymore, Murderland". When Osama bin Laden was killed, Steven Colbert noted that if the capitol of Pakistan was Washington D.C., then the bin Laden compound was in Baltimore... then observed that you were more likely to get shot in Baltimore. Since the Freddie Gray Riots in 2015 (two riots, one lesser known that took place on a Saturday and caused Camden Yards to refuse people from leaving the stadium as the riot was one block over and the more well known one the following Monday), the murder rate has gotten much worse. With an average of one murder a day, Baltimore may not boast the most murders per day (that honor goes to Chicago) but it holds the most murders per populous. To put this in perspective, in 2016, Chicago had just north of 700 murders compared to Baltimore's 300+. However, Baltimore is a smaller city and, had it had a population similar to that of Chicago, would have had an estimated 1,000 plus murders. And those are just the people who die. The number of people who are the victims of violent crime is incredibly high and the only reason that the shooting victims to murder ratio is so low is some of the worst parts of the city just happen to be near some of the best hospitals in the country. So the good news is if you're shot in Baltimore, you're more likely to survive. The bad news is you're more likely to get shot in Baltimore! It's gotten so bad that the Yanks with Tanks have started sending combat surgeons to train in area hospitals because it's the closest thing in the states they have to actual injuries they are likely to face in the field. So the reputation in media, while unfortunate, is not unfounded.

Unfortunately for the rest of Maryland, people from out of state tend to use "Baltimore" and "Maryland" interchangeably, despite the cultural diversity of the state. Fun fact: The most populous and economically important county in Maryland, which is also the one Maryland location out of the 20 finalists for Amazon's HQ 2, is not even in the Baltimore metropolitan area.

Baltimore is the only jurisdiction specifically established by the Constitution of Maryland (all other cities, towns and counties were established by ordinary legislation).

Notable Pop Culture Things From or Set in Baltimore

Notable Pop Culture Things From or Set in Maryland in General 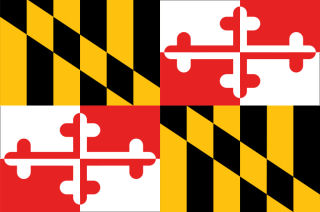