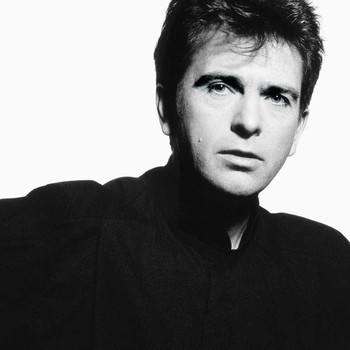 Without a noise, without my pride
I reach out from the inside
Click here for the standard cover with lettering 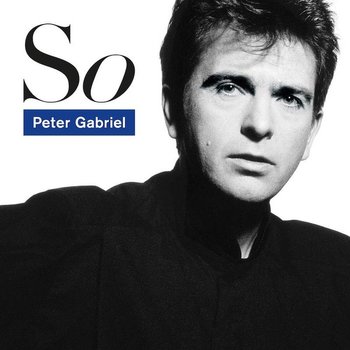 "The place where I come from is a small town
They think so small, they use small words
But not me; I'm smarter than that
I've worked it out
I'll be stretching my mouth to make those big words come right out"
—"Big Time"
Advertisement:

So is the fifth studio album recorded by singer/songwriter Peter Gabriel. It was released through Charisma Records in the United Kingdom, and Virgin Records and Geffen Records elsewhere in the world, on 19 May 1986.

His final album on Charisma Records, with whom he had been signed to since his days with Genesis, the album marks a shift to a more accessible art pop direction compared to the more abstract style of his previous albums. Making greater use of radio-friendly song structures and instrumentation while still focusing on a World Music sound (particularly traditional African and Brazilian music) and heavy use of digital sampling via the Fairlight CMI, it stands in stark contrast to the Progressive Rock of his first two albums and the experimental Post-Punk-meets-worldbeat sound of his third and fourth records, and would set the precedent for his following work even after he shifted back to a more obtuse direction. The album also sees a greater number of guest vocalists than previous albums, featuring backing parts by Kate Bush, Youssou N'Dour, and Laurie Anderson (Bush had previously appeared on Gabriel's "No Self Control" and "Games Without Frontiers" in 1980). Additionally, it is Gabriel's first album to not be a Self-Titled Album, owing to increasing pressure from both Charisma and his American label Geffen Records, the latter of whom had previously forced Gabriel to retitle his fourth album Security in the US and Canada.

The end result was a massive commercial success for Gabriel, topping the charts in the UK, Austria, Canada, the Netherlands, Italy, New Zealand, and Norway, and peaking at No. 2 on the Billboard 200, catapulting the cult favorite musician into a worldwide phenomenon as "Sledgehammer" and "Big Time" became hits on MTV. To this day, it is still his highest-selling studio album, being certified quintuple-platinum in the US, triple-platinum in the UK, platinum in Germany, the Netherlands, and New Zealand, and gold in Belgium, France, Hong Kong, and Spain. So is significant in a broader perspective in that, along with Graceland by Paul Simon, it marked the peak of the western worldbeat boom that both Gabriel himself and Talking Heads had instigated in 1980 with Gabriel's third Self-Titled Album and Remain in Light.

On a more dubious note, the album's creation also marked the slowing-down of Gabriel's creative process as an artist. Unlike prior records, which took only a few months at most to record, Gabriel spent almost the entirety of 1985 putting together So, with later studio albums only taking longer and longer to come out. Gabriel later admitted that this was the result of Attention Deficit Creator Disorder, constantly taking on other commitments that end up stalling album production. Gabriel's next studio album after So, Us, would take nearly three years to complete, and the album after that took seven. While the two albums after that, Scratch My Back and New Blood, were both completed fairly quickly, those were a Cover Album and a series of re-recordings of old material, respectively; Scratch My Back also only started production seven years after its predecessor's release. His prospective tenth studio album (and eighth of original studio material), I/O, is still in production to this day.

So was supported by five singles: "Sledgehammer", "Don't Give Up", "In Your Eyes", "Big Time", and "Red Rain". "That Voice Again" was also given out to radio stations as a promotional single.

I've been troping the rhythm:

"Anne with her father is out in the boat
Riding the water, riding the waves
On the sea."