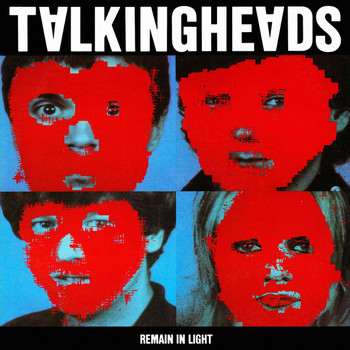 "And you may ask yourself, 'Well, how did I get here?'"
"Remain in Light really knocked me out with all the cross-rhythms. The bass never seems to come in where you'd expect it. [...] You could always tell with this band that they weren't writing to be commercial— they were just doing the music that they really felt. There was something incredibly spontaneous about them."
— Richard Wright
Advertisement:

Remain in Light, released in 1980, is the fourth album from Talking Heads. Its their third and final album to be produced by Brian Eno, after More Songs About Buildings and Food and Fear of Music. Eno split with the group as a result of the album's Troubled Production and disagreements with frontman David Byrne about their solo project My Life in the Bush of Ghosts (which was produced earlier but released a year later).

Born out of a desire to challenge Talking Heads' image as a vehicle for David Byrne, the album marked a radical departure from Talking Heads' previous albums, combining the band's signature Post-Punk and New Wave Music riffs with dense polyrhythms inspired by Nigerian Afrobeat artist Fela Kuti. The choice in sound primarily came from bassist Tina Weymouth and drummer/husband Chris Franz, who were growing irritated with Byrne's control of the band yet couldn't agree on what to do about it. Traveling to the Caribbean to think the matter over, they grew interested in the reggae scene there and came up with the idea of producing more collaborative music (after three albums near-unilaterally written by Byrne) rooted in Black musical styles not covered by mainstream rock. At the same time, the mainstream rise of Hip-Hop made the band members realize that the landscape of popular music was about to change dramatically, encouraging them to adapt sooner than later through this internationally-inspired approach.

To consolidate their shift in style, the band brought aboard a large number of session musicians experienced in funk, Afrobeat's mother genre, and/or Avant-garde Music, with the latter category including guitarist and future King Crimson frontman Adrian Belew (previously known for his work with Frank Zappa and David Bowie) and trumpeter Jon Haskell. The album's material was recorded through improvisational jam sessions, emphasizing serendipitous songwriting that built off of mistakes following a comment from personal friend David Gans that "the things one doesn't intend are the seeds for a more interesting future." This approach extended to Byrne's lyrics as well, developing vocal melodies through scatting before constructing stream-of-consciousness lyrics based on both his own struggles with writer's block at the time and Eno's belief that lyrics were not as important to a song's meaning as laypeople like to believe (which had previously informed the found audio vocals on My Life in the Bush of Ghosts).

Along with Peter Gabriel's Melt, released earlier that same year, Remain in Light marked a change in direction for popular music — especially New Wave Music — which became looser and more open to African and other "ethnic" influences. This would most prominently manifest throughout the decade in the form of worldbeat, which mixed rock with musical styles from Sub-Saharan Africa; Talking Heads would carry over the style to their next album, Speaking in Tongues, before veering away from it on Little Creatures and True Stories in favor of exploring music from the southern United States. They would ultimately return to a worldbeat sound on Naked, which built off the Tejano influences on True Stories to create a blend of Alternative Rock, Afrobeat, and Latin American music, a mix that would inform much of Byrne's solo career after the band's 1991 breakup.

Remain in Light was supported by three singles: "Once in a Lifetime", "Houses in Motion", and "Born Under Punches (The Heat Goes On)". "Crosseyed and Painless" was also released as a promotional single.

Take a look at these tropes!