Music / Once in a Lifetime 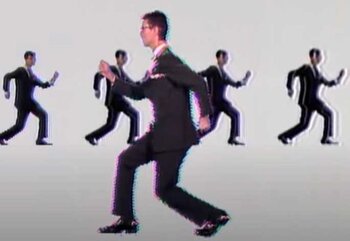 "Same as it ever was."
Advertisement:

"Once in a Lifetime" is a song by American Post-Punk/New Wave Music band Talking Heads, originally released on their 1980 album Remain in Light. Like the rest of the album, the song was born out of the band and producer Brian Eno's growing interest in Afrobeat, Eno and frontman David Byrne having already taken heavy influence from the genre with their collaborative album My Life in the Bush of Ghosts (which was still awaiting sample clearances).

Keeping in line with the album's improvisational approach, "Once in a Lifetime" was born from a jam between band members and married couple Chris Frantz and Tina Weymouth, who respectively interjected nonsense syllables and turned those shouts into a bass riff. Eno initially found the jam difficult to flesh out, but Byrne liked the song enough to turn it into something bigger. Eno cobbled together a chorus melody through scat singing, while Byrne took influence from televangelists and radio preachers to create a mock sermon about the ennui of middle class capitalist life. The end result was a track radically different from Talking Heads' norm, combining the post-punk and Afrobeat core with elements of Hip-Hop and Gil Scott-Heron-esque conscious poetry.

During Remain in Light's promotional cycle, "Once in a Lifetime" was picked as the album's leadoff single in 1981, following a promotional release of "Crosseyed and Painless". A music video was also shot to promote the track, the first in Talking Heads' careers. Directed by choreographer Toni Basil and Byrne himself, the low-budget video depicted Byrne as a sweaty, neurotic preacher, clad in a suit and glasses, performing various odd rituals, and reciting the song's lyrics against various Chroma Key backdrops. Like the music, Byrne's moves in the video were improvised by the man himself, with Basil singling out the ones she thought worked best; the pair would collaborate again for a music video for "Crosseyed and Painless", without any of the band members on-camera this time. While the physical single stiffed (just barely making the Bubbling Under chart), the music video quickly found a home on a fledgling network by the name of MTV. Appearing as part of the network's debut broadcast

on August 1, 1981 (specifically being their 64th video), MTV quickly placed it in heavy rotation throughout the year, making it one of the first videos to achieve that distinction and encouraging Talking Heads to continue exploring the music video as an artistic extension of their music.

In 1984, a live recording of "Once in a Lifetime" was released, taken from the Speaking in Tongues tour to promote their Concert Film and Live Album Stop Making Sense; the film's depiction of the song was used as an impromptu music video for the live single. While Talking Heads stopped doing live performances after that tour (barring a one-off reunion at their Rock & Roll Hall of Fame induction in 2002), "Once in a Lifetime" remains a staple of Byrne's live performances as a solo act, with two new live renditions appearing on both Saturday Night Live and the American Utopia concert film in 2020. "Once in a Lifetime" would also inform the titles of two post-breakup compilations of Talking Heads material: a Greatest Hits Album released in 1992 (as an international-exclusive truncated version of the Sand in the Vaseline retrospective) and a three-CD + DVD Boxed Set put out in 2003.

Into the tropes again, after the money's gone: