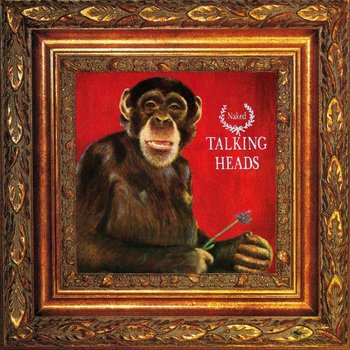 "From the age of the dinosaurs, cars have run on gasoline."
"If there is no Tiger in the mountains, the Monkey will be King."
Chinese proverb, quoted in the LP liner notes (as well as those of the 2005 remastered CD).
Advertisement:

Naked, released in 1988, is the eighth and final album by American Alternative Rock band Talking Heads. It was the band's first and only album to be released through Fly Records, a vanity label briefly used between 1988 and 1990 for two studio albums* this one and Walk on Water by band member Jerry Harrison's "Casual Gods" side-project, three singles* two of which were off of Naked, and the third off of Walk on Water, and a compilation of Brazilian folk songs put together by frontman David Byrne (which doubled as the debut release by his vanity label Luaka Bop). As with all of Talking Heads' albums since the Stop Making Sense live record in 1984, the Fly Records catalog was distributed by Sire Records in the United States & Canada and by EMI everywhere else until the rights to the band's post-1984 output outside of North America shifted to Parlophone Records in the wake of EMI's collapse.

Following the middling critical and fan reception of True Stories two years prior, the band decided to shake up their ever-malleable sound again, choosing to shift back to a worldbeat sound in response to the Ronald Reagan administration's increasingly isolationist foreign policy approach. The band recorded around 40 improvisational jam sessions and flew off to Paris to collaborate with a bevy of guest musicians; lyrics and melodies were then written and recorded by Byrne back in New York.

Produced by Steve Lillywhite (an in-demand producer at the time for his work with U2 and Peter Gabriel), the resultant album is a return to the formula fostered by Talking Heads' landmark 1980 album Remain in Light, combining Post-Punk & New Wave Music with African polyrhythms and the Latin funk instrumentation that Byrne developed an interest in during the latter half of the decade. The album was a moderate commercial success, reaching No. 19 on the Billboard album charts and going gold (sales of over 500,000 copies), the last Talking Heads album to receive any kind of sales certification by the RIAA going by release ordernote The latest certification as of 2019 is a double platinum (sales of over two million) for the Stop Making Sense soundtrack in 1994. However, where exactly Talking Heads would go from here would be a question that would ultimately remain unanswered: the band dissolved shortly after the album's release, first claiming to be on hiatus before eventually confirming their split at the end of 1991. Byrne would put out his solo sequel to Naked, Uh-Oh, just months later.

Naked produced two singles: "Blind" and "(Nothing But) Flowers". A promo single of "Mr. Jones" was also released, but was never made commercially available.

No one ever said he was involved with tropes: