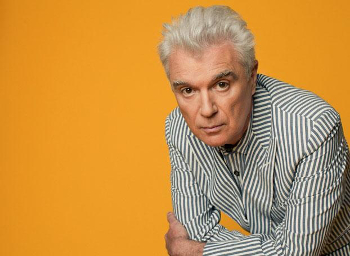 And the music comes from the hydrogen bomb. Rock bands died when amateurs won.
"I've made money, and I've been ripped off... I've had creative freedom, and I've been pressured to make hits. I have dealt with diva behavior from crazy musicians, and I have seen genius records by wonderful artists get completely ignored... If you think success in the world of music is determined by the number of records sold, or the size of your house or bank account, then I'm not the expert for you. I am more interested in how people can manage a whole lifetime in music."
— David Byrne, How Music Works
Advertisement:

Cloudcuckoolander extraordinaire David Byrne (born 14 May 1952) is a well-rounded individual and something of a maverick in the music world. He's most famous for his stint as the frontman and primary songwriter for the wildly-influential Post-Punk/New Wave Music band Talking Heads, but he's also a solo musician whose genre-hopping makes the already aurally diverse Heads sound normal by comparison. He's also a visual artist, a one-time film director and actor, a published author, an avid bicyclist, and the author of a column about bicycling in The New York Times.

While most of it is vaguely definable as Alternative Rock or art pop, Byrne's music is impossible to pigeonhole and difficult to generalize. Even within a single album, he won't stick to one genre, nor does he play any given style straight. That said, elements that pop up frequently across his discography include: art-punk, funk, African-inspired polyrhythms, Latin American influences, and very surreal lyrics delivered in a fashion that is either passionately hammy or utterly deadpan.

Byrne is also fairly notable for being one of few known autistic musicians to achieve critical and commercial success; he revealed that he was autistic in 2009, specifically stating that he had Asperger's Syndrome (which was absorbed into Autism Spectrum Disorder by the APA in 2013). Music, like acting, is often considered to be an extremely hard field for autistic people to make any headway in, making Byrne's success and influence on popular music quite significant in that regard.

Microsoft Windows users may recognize his single "Like Humans Do" (from the album Look into the Eyeball), which was used as a stock song for Windows Media Player on XP.

David Byrne and his works provide examples of: