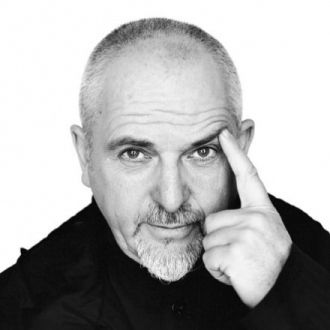 "Hi there!"
"Ladies and gentlemen, our first reading is from the early part of Genesis, which many scholars argue is the definitive part of Genesis, because that's when they still had Peter Gabriel."
—''The Bible: The Complete Word of God (abridged)''

Born in Surrey, England, Peter Brian Gabriel (born February 13, 1950) is the former frontman of the influential Progressive Rock band Genesis (for details on his time with them, visit their page) and currently a solo artist.

After leaving the band, he first gained a hit with "Solsbury Hill," which was, appropriately enough, about his breakup with them. He then went on to release four increasingly experimental solo albums from 1977-1985. These were all initially titled eponymously, but have since gained nicknames (based on their cover art) that have been embraced by the fandom (and Gabriel himself). Each were fairly successful, with the third and fourth producing multiple hits, such "Games Without Frontiers", "I Don't Remember", and "Shock the Monkey".

Then came 1986, and his album So along with it. It was a smash hit that gave Gabriel his greatest mainstream success, featuring some of his most famous songs (particularly "Sledgehammer" and "In Your Eyes"). Six years later came Us, followed (almost ten years later) by Up, with his most recent being a Cover Album, Scratch My Back. He has also done work for various films, most famously singing Randy Newman's "That'll Do" for the film Babe: Pig in the City and for writing and performing "Down to Earth" for WALL•E, each earning Academy Award nominationsnote but losing to songs for The Prince Of Egypt and Slumdog Millionare, repectively.

Gabriel is a pioneer in many respects: he was one of the first popular artists to start including World music (particularly African) influences into his music, and was the first to use the "gated drum" sound as well (it was invented by producer Hugh Padgam and former bandmate Phil Collins for a track on Gabriel's third self-titled album, later becoming a signature sound of Collins' own hit singles). He was one of the founders of On Demand Distribution, which in the early '00s was one of the leading downloadable music platforms in Europe (it was later acquired by Nokia). In 1980, he founded WOMAD, an arts & music festival that helped to pioneer the world music movement. He also works for many varied charities, in particular Amnesty International with its human rights campaigns, which he has been involved with since the early '80s.

Oh, won't you trope for me?/I will trope for you: