Music / A Kind of Magic 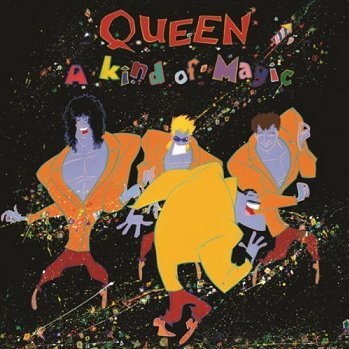 One dream, one soul, one prize, one goal…
A Kind of Magic is the twelfth studio album by the British rock band Queen, released in 1986. It is considered an unofficial soundtrack album to the 1986 movie Highlander, with only three songs — "Pain Is So Close To Pleasure", "Friends Will Be Friends", and "One Vision" — not appearing in the film. ("One Vision" was previously released in 1985 and had also appeared in the 1986 movie Iron Eagle.) This album would be the last one promoted with a tour, because of Freddie Mercury's diagnosis with HIV the following year, leading to his death in 1991.
Advertisement:

The album was the band's first to be recorded and mixed digitally instead of with traditional analog equipment (though the initial US CD mistakenly labels it an analog recording). The decision to do this gave Queen greater flexibility with their trademark elaborate production style, which on at least one occasion had worn down a reel of analog tape to the point where parts of it became transparent; the band would continue using digital equipment for their subsequent albums. The album was also the band's first to be oriented more for the Compact Disc format than the LP or cassette — CDs had just received their big breakthrough with Dire Straits' Brothers in Arms (also recorded and mixed digitally) the previous year, and Queen were eager to make use of the format as well, featuring three bonus remixes (dubbed "Extra Magical Ingredients") on the CD release of A Kind of Magic. The band would also include bonus remixes on their next album and on the US reissues of their backlog by Hollywood Records in 1991.

A Kind of Magic was supported by more singles than any other Queen album, at a whopping seven. Of the nine tracks included on the base album, the only two that weren't released as singles were "Gimme the Prize (Kurgan's Theme)" and "Don't Lose Your Head"; even the three bonus remixes included on the initial CD release were sourced from those singles.

Heeeeere we are! Born to be kings, we're the tropers of the universe!