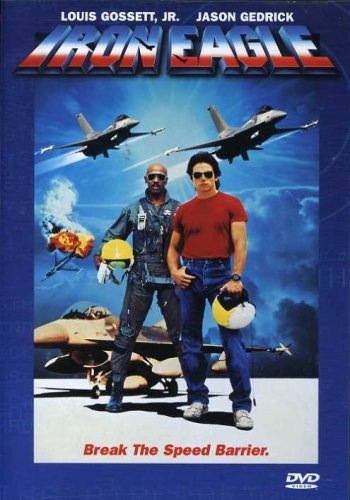 Break the what, now?
"God doesn't give people talents that he doesn't want people to use. And he gave you The Touch. It's a power inside of you, down there where you keep your guts boy. It's all you need to blast your way in and get back what they took from you."
— Charles "Chappy" Sinclair
Advertisement:

Iron Eagle is an action film series that lasted just under ten years, from 1986 to 1995. They follows the exploits of the United States Air Force Colonel (later Brigadier General) Charles "Chappy" Sinclair (Louis Gossett Jr.) in his seemingly never-ending battles against hostile foreign regimes, drug smugglers, terrorists, and rogue government agents. The films were directed by Sidney J. Furie, with the exception of the third entry which was helmed by John Glen. The films are known for their spectacular aerial action sequences, over-the-top soundtracks, and jingoistic political sentiments - the latter courtesy of screenwriter Kevin Alyn Elders and whichever government was helping produce the film.

The first film was not a financial success nor was it critically well-received, but it performed well-enough on the home video and cable TV market to spawn several sequels, with the continuity character oddly being Chappy instead of Doug. Iron Eagle II even goes so far as to kill Doug off in the first five minutes.

With their focus on High-Altitude Battles and Old-School Dogfights, the films have inevitable drawn comparisons with Top Gun, with the first film often being perceived as a cash-in attempt off its unprecedented success. In fact, the first Iron Eagle entered production before Top Gun, was released first, and had a slightly higher budget. This hasn't stopped it from being referred to as "the poor man's Top Gun", a fact not helped by the increasingly preposterous and cheap sequels. That many of the films were produced in Canada or Israel helps add to "foreign ripoff" perception.

There have been four installments in the Iron Eagle film series to date, with the last coming out in 1995. They are: