Film / In Which We Serve 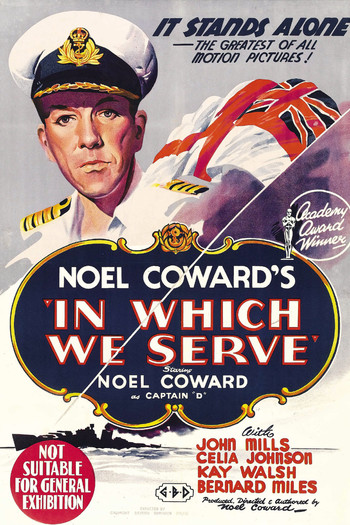 "This is the story of a ship."
Advertisement:

In Which We Serve is a 1942 British war film co-directed by David Lean and Noël Coward.

It was based on a script, music, and production by Coward, who also plays the starring role of Captain Kinross. It is the tale of the HMS Torrin, a Royal Navy destroyer. The Torrin goes into action off of Crete in 1941, only to be sunk by the Luftwaffe. As Captain Kinross and his crew scramble for life rafts, their stories and the history of the ship are told in a series of flashbacks. Through these flashbacks we get a portrait of the early years of the war and how all of Britain is fighting.

The film was made during World War II to boost up the morale of the British military and the people at home. The story is based on the 1941 sinking of the British destroyer HMS Kelly and Lord Mountbatten's recollections of this event. It's widely seen as one of the classics of British cinema, especially regarding war time films.

The film won an Honorary Academy Award for the production and was nominated for Best Picture and Best Original Screenplay. In Which We Serve credits Noël Coward as Star, Producer, Writer, Composer and Director, the last credit being shared with David Lean. However, the 'director' part is debatable, the original intention was for Coward to direct the actors and Lean to direct the action sequences, but as the film went on Coward became bored with the film-making and left most of the work to Lean.

John Mills plays Shorty Blake, a sailor aboard the Torrin with a pregnant wife back home in England. Richard Attenborough made his film debut as a young stoker.

In Which We Serve provides examples of: