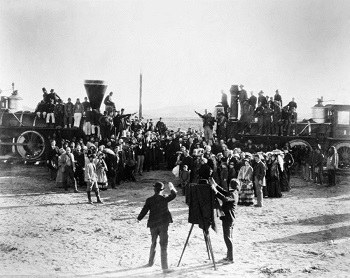 The Iron Horse is a 1924 film directed by John Ford.

It is a story of the construction of the Transcontinental Railroad in the 1860s. The film opens with young Davy Brandon accompanying his father, a surveyor, on a trek to examine possible railroad routes. Right after the Brandons discover a pass through the mountains, Davy's father is murdered by a band of Cheyenne, led by a white man who is missing the last three fingers on his right hand.

Skip forward a couple of decades, and construction on the railroad is underway. David Brandon Sr.'s old friend, Thomas Marsh, is a contractor with the Union Pacific, and his daughter Miriam (Mae Marsh), Davy's childhood sweetheart, has come along. Miriam is engaged to Jesson, the railroad's chief engineer. Grown-up Davy is a Pony Express rider for the railroad. Unfortunately for the railroad, Jesson is in cahoots with Bauman, an unscrupulous land speculator who is trying to detour the railroad through some land that Bauman owns. Unfortunately for Davy, Bauman always keeps his right hand hidden...

Although The Western had been a popular genre dating back to The Great Train Robbery in 1903, this film, along with The Covered Wagon the year before, marked the evolution of the genre into epic drama. It was also the first big western for Ford, who would spend decades making many classics of the genre.