Manga / My Dad's the Queen of All VTubers?! 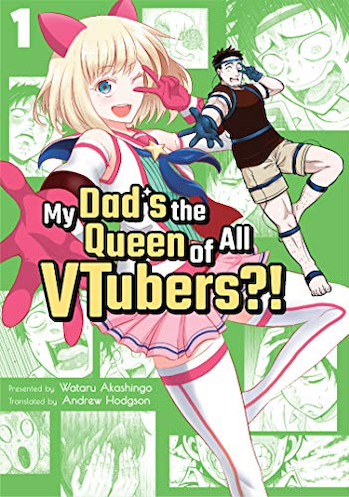 Takashi is a big fan of the top Virtual Youtuber Kizuke Yai. One day, he walks into his dad's room and finds out that his dad mid-stream of being Kizuke Yai.

Thus begins the Cringe Comedy of Takashi having to live with knowing the Awful Truth, and how VTubers work in general.

Written by Wataru Akashingo, My Dad's the Queen of All VTubers!? (Oyaji ga Bishoujo ni Natteta Hanashi, lit. "The Story of How My Father Became a Cute VTuber Girl") is a manga about the ups and downs of the VTuber business. It was originally posted as a series of strips on Twitter in 2019 before being fully serialized in Monthly Comic Action. Kaiten Books picked up the English licence for the series starting in 2020.

My Dad's the Queen of All VTubers!? provides examples of the following tropes: