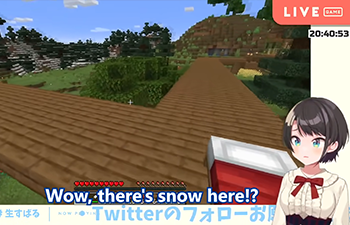 Virtual YouTubers, or VTubers for short, are a type of online performer that have gained immense popularity on various streaming sites since 2016. The phenomenon originated on YouTube, hence the name; however, a large number of VTubers can be found on Twitch as well, and a few can be found on smaller services such as NicoNicoDouga in Japan and bilibili

in China. Regardless of the streaming service used, however, "VTuber" has become the default term for this type of performer.note Twitch prefers the term "virtual streamer," obviously not wanting to give their competition free advertising, but that isn't commonly used; in fact, they finally gave in and provided a "VTuber" tag for streamers to use in early 2021.

Unlike virtual celebrities such as Hatsune Miku, the performer behind the VTuber is a real person, but they utilize an animated avatar to represent the character they are portraying. The avatar is "rigged" to move and react as the performer does, utilizing various forms of motion capture software. Both 2D and 3D avatars are used, depending on performer preference and available resources.note 2D avatars are, in general, easier to rig up and use for streaming; 3D avatars are often reserved for special occasions or events.

The major appeal of using an animated avatar is that the performer is not constrained by real-world considerations (such as gender or appearance) and they can design their character to be just about anything, although most avatars are still generally humanoid in shape. Also, considering the first VTubers were Japanese and heavily anime-inspired, most who have followed utilize similar elements in their avatars, to varying degrees. Many VTubers also appreciate the level of anonymity using an avatar provides.

The technology behind this has been around for decadesnote In the 90s Nintendo created software for Charles Martinet to portray Mario in this manner at trade shows and conventions, and some early takes on the concept were seen as early as 2011, such as UK-based 'animated' blogger Ami Yamato. However, most fans consider the first "true" VTuber to be Kizuna AI, who debuted on YouTube in 2016. Ai was the first to coin the term "Virtual YouTuber" as part of her greeting. The early VTubers used 3D avatars, and released pre-recorded videos on a regular basis. Following the lead of Nijisanji and hololive, which were established in 2018, later VTubers moved more toward using 2D avatars, as well as shifting toward a live-streaming model.

The VTuber phenomenon came to the attention of western audiences thanks to individuals and groups on YouTube creating translated videos of the Japanese content, several of which went viral. Western fans started supporting their favorite Japanese streamers, as well as creating their own characters on both YouTube and Twitch. In turn, many Japanese VTubers embraced their overseas fans, some studying English so they could communicate with them more readily. hololive established an English-speaking unit in 2020, with Nijisanji following suit in 2021.note Both groups also have units in Indonesia, whose members speak English regularly; Nijisanji had a unit in India as well but the unit is no longer active.

The conventions of VTuber streamers, including English ones, are strongly based on Japanese streaming culture, and include many distinctive elements from there. These include common streaming topics like karaoke streams (Japanese: 歌枠, utawaku, literally "song stream") and free talk streams (Japanese: 雑談, zatsudan), as well as popular non-stream video topics like song covers (typically Vocaloid songs), a result of the influences of karaoke and utaite culture on Japanese streaming.

Related to the utaite subculture, a distinctive subset of VTubers present themselves as Virtual Singers, or VSingers for short. VSingers are functionally VTuber utaite, and their contents prioritize original/cover songs over video game streaming compared to "standard" VTubers.note Of note is that singing voice synthesizing programs like Vocaloid (and their avatars) are also commonly described as "Virtual Singers"; while the two definitions of "Virtual Singers" share a significant aesthetical overlap, they are fully distinct in practice.

In Japan, Virtual YouTubers, along with E-Sports, have also helped to increase (and revitalize) interest in PC gaming in general, and introduce western gaming genres such as First-Person Shooters and Survival Sandbox to a new audience. Besides the fact that it's easier to play games on the same system being used to stream fromnote streaming console games requires additional hardware and set-up, the competitiveness, cooperativeness, and high creativity potential found in these types of games has made for some very entertaining Let's Play content.

Not to be confused with the VTubers Let's Play channel of the Ryan ToysReview franchise, which does not utilize these concepts.

Related Pages on TV Tropes include: