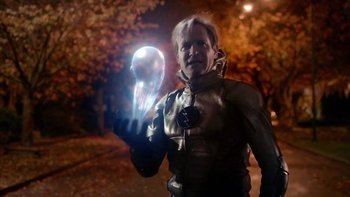 Most heroes can kick some serious butt, but that doesn't mean they're experts in every aspect of their job - or life, for that matter. Who will scan the building and analyze threats? Who will keep track of their vitals, or their schedule? Who will gather that much necessary information to continue? Who will offer sagely advice?

A Virtual Sidekick is a type of Artificial Intelligence. It's almost always seen in Cyberpunk or 20 Minutes into the Future settings. Their job is usually to assist their owner or friend (depending on how much they emote) with any sort of task, such as hacking, monitoring, analyzing and searching. Essentially, they are a combination of Voice with an Internet Connection, Mission Control, and Expositron 9000. One advantage they usually have over the Robot Buddy is that they're not in danger during combat situations, and other people are unaware of their presence, and thus they can work in secret. A disadvantage is that since they lack a physical body, they're not able to directly assist in physical tasks.

They are usually tagging along in some kind of sci-fi wristwatch, a gauntlet of some sort, a smartphone or an ear piece. They key element is that the "user" does not need to carry around any large pieces of hardware, unless it's Power Armor or similar. This helps the Virtual Sidekick to accompany The Hero in any given location.

A major difference between the Virtual Sidekick and its fantasy counterparts is that they're no longer The Hero's moral compass. Most of the time, they can't understand human emotions or concepts such as spirituality or philosophy are beyond them, so they can't act as The Mentor either. Of course, that is not universal, and over time they may grow beyond their programming. They'll most usually be a Benevolent A.I., but for all you know they might be trying to take over the world.

They may usually accompany the Science Hero, Gadgeteer Genius, or an I Work Alone type who can't stand, or trust, anyone else.

Contrast and compare Fairy Companion, Spirit Advisor, Robot Buddy, Voice with an Internet Connection and Expositron 9000. Subtrope to Non-Human Sidekick. Not to be confused with Spaceship Girl, though the two may overlap at times. May also overlap with Benevolent A.I. and Kiss Me, I'm Virtual.