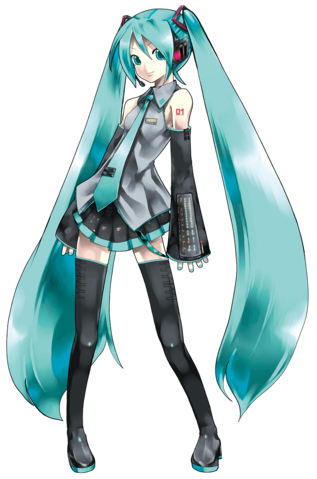 She'll Miku-Miku you.
Click here to see her V3 design. 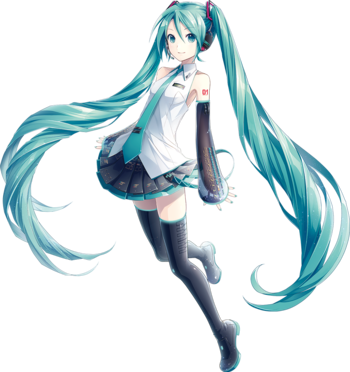 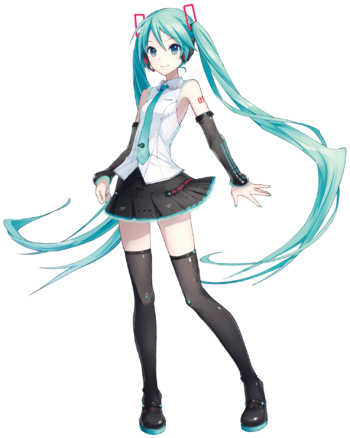 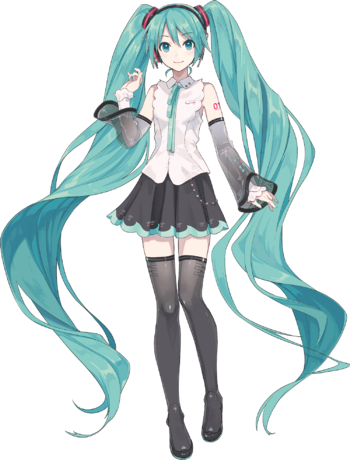 Virtual Idol. Digital Diva. CV01. The First Sound of the Future. Whatever you want to call her, if you're familiar with the Japanese music scene or especially the vocal synthesizer scene of the early 21st century, you can't say you haven't heard of Hatsune Miku.

Originally released as a Vocaloid program in Crypton Future Media's "Character Vocal" series of singing synthesizers, Hatsune Mikunote Eastern order; "Hatsune" being the surname set a lot of milestones for the software: not only was she the first Japanese vocal for the VOCALOID2 engine, she also was the first to have a real avatar (Most of the English banks of the day used stock photos, Kaito and Meiko's initial character designs were more decorative, and while Sweet Ann did have a themed avatar, it wasn't fully incorporated into the voice bank), the first to be marketed as a "character"'s voice rather than a replication, and the first to have any kind of story attached to her. Her bio stated she was an android that came from a future with no music, and she wanted to spread her love of song to the world to keep that future from happening.

Her popularity skyrocketed when her demo song "Miku Miku ni Shite Ageru" and Otomania and Tamago's "Ievan Polkka" video released to Nico Nico Douga, and she retains a prominent presence there to this day: the synthesized voice that sings the site's jingle is her, and she and her content creators still make and distribute videos for the platform. Her popularity brought Vocaloid as a software into the greater public conscious, especially after the videos started coming westward through the likes of Youtube.

The very versatile nature of her software meant she could be suited for any role: poppy and bright, moody and serious, sexy, robotic, human — and since her creative team is also her fanbase, it means her sound is whatever it wants to be. She's worked with the likes of Supercell, Honeyworks, Anamanaguchi, and many more; and for some creators, she helped them get their start.

Since 2007, Miku has grown out from her origins as a synthesizer program: more than any other Vocaloid, she's done ads, interviews, collaborations, videos, and her ever-changing status makes her one of the frontrunners of the virtual age. She's become a quasi-mascot for her creators' hometown of Sapporo, featured prominently in advertising campaigns. The most well-known being the "Snow Miku Festival", a long-running collaboration with Sapporo's annual Snow Festival featuring her and other Crypton mainstays. She's also got the distinction of holding several well known concerts in her name, starting with 2012's Miku Party, the international Hatsune Miku Expo, and even the Miku Symphony, among her regular appearances in other concerts like Nico Nico Cho Party.

As of 2020, Miku (alongside her other Crypton friends) has shifted away from her VOCALOID roots and is now part of a new product line called "NT (Newtype)", a voice synthesis software developed by Crypton Future Media (in collaboration with Yamaha) running on their proprietary Piapro Studio engine. NT was created in response to Yamaha's VOCALOID5 software aiming for more realistic voice synthesis; NT is designed expressly to preserve the mechanical/robotic qualities of their original voice banks that gave them a unique sound during the height of VOCALOID popularity. In addition to running on proprietary software, NT is designed to be compatible with post-launch updates, giving its developers the opportunity to respond to feedback and improve the engine and voice synthesis even after launch, which is not supported by VOCALOID. Hatsune Miku NT was released to the public on November 27th, 2020, and the video game Project SEKAI serves to demonstrate the use of the software.

For tropes specific to her (fictional) depictions in Project SEKAI, see the respective character page.

For tropes specific to her Project DIVA depictions, see the respective character page.