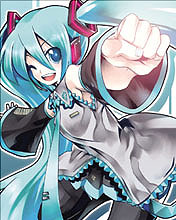 Hatsune Mix is a comedy/parody manga based on Crypton Future Media's famous Vocaloid voice synthesizer characters, Miku Hatsune, Rin and Len Kagamine, Luka Megurine, Meiko, and Kaito. Each chapter is a stand-alone story and marks the trials and tribulations of the group of pop singers. It's written and illustrated by KEI, the artist behind the original character artwork for Miku, Rin, Len, and Luka. As the characters intentionally have no canon personality traits, the manga is considered unofficial.

Dark Horse Comics published the manga in English in 2014.