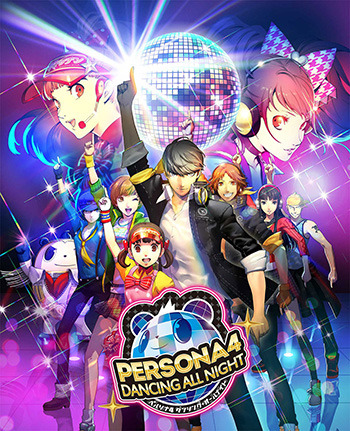 If you never give up, life keeps on groovin'!
Couldn't help but move,
The threads of fate had spun us
Into each other's lives by chance
All this energy's got us inspired now,
We couldn't stop it; just set it free and...
Dance!
— Dance!, performed by Lotus Juice and Shihoko Hirata
Advertisement:

Persona 4: Dancing All Night is a 2015 Spin-Off Rhythm Game based on Persona 4 for the Playstation Vita.

The plot takes place a month after the extended epilogue of Persona 4 Golden and is chronologically the final game to feature the Investigation Team. Rise "Risette" Kujikawa, back in showbiz after her year-long hiatus, requests her friends to act as her backup dancers at the "Love Meets Bonds Festival", a music event sponsored by Rise's agency, and personally trains them for this purpose. Everything goes well until rumors spread that if you watch a particular video on the festival's website at exactly midnight, you'll be pulled to the "other side." Sure enough, the J-Pop Idol Group of Rise's Friendly Rival Kanami Mashita goes missing shortly thereafter in a manner eerily similar to the rumor. Fearing the worst, Rise begs her friends from the Investigation Team to help her solve the case.

Gameplay shares a few elements with the Hatsune Miku: Project DIVA series of games, as the development team for Dancing All Night had assistance from Project DIVA developers, however, much unlike Persona Q: Shadow of the Labyrinth and its strong similarities to Etrian Odyssey, Persona 4 Dancing All Night stands on its own as a game for the most part. With a User Interface very different from that of Project Diva and a greater focus on choreographed dances than music-video-style visuals, Persona 4 Dancing All Night brings its very own flavor to the table: All dances were choreographed and danced by professional dancers, tailored to the characters' personalities and animated using very fluid Motion Capture.

The songs are mostly remixes from Persona 4 and Persona 4 Golden, along with a couple original tracks and songs from Arena and Q . You can play as any of the Investigation Team members plus Kanami, Nanako, and Margaret, along with a few others as DLC in a free play mode, though Margaret and the DLC characters do not make a playable appearance in story mode. Every character is limited to being the Main Dancer in the 2-4 songs choreographed for them (Margaret and the DLC characters are limited to only one song), albeit most characters can also be unlocked as "Social Link Fever Partners" who temporarily join other characters in their dances.

Two sequels were announced on August 2, 2017, Persona 3: Dancing in Moonlight and Persona 5: Dancing in Starlight, releasing Spring 2018 for the PlayStation Vita and PlayStation 4. PS4 owners were also able to download Dancing All Night when the two games released.

This page contains spoilers from Persona 4. You Have Been Warned!